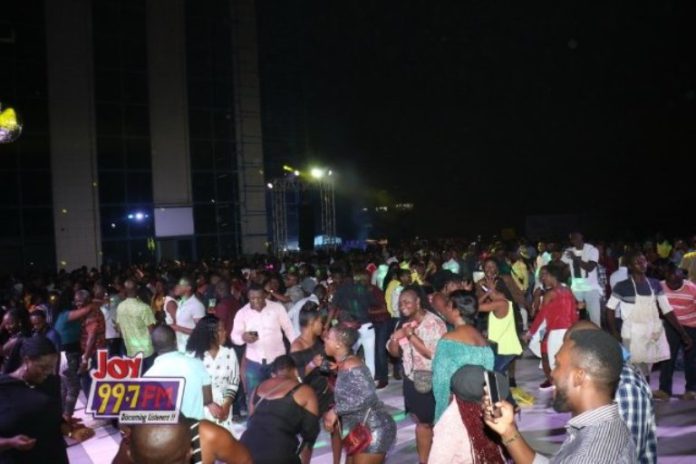 Marks of thrill left on the walls of the Silver Star Tower in Accra Friday night did not only reinforce the reputation of the first official party of the year but the biggest the decade may ever see.

The Joy FM ‘90s Jam left even more imprints as patrons took home remnants of classic music from the last two decades while craving for more.

Although a huge number of music lovers turned up for the party, the disc jockeys (DJs) did not find it a daunting task to get all attendees jamming to the 90s groove.

The charged nature of the crowd gave credence to the saying “when music hits you, you feel no pain.”

Disc Jockeys tasked with the audacious task of triggering nostalgia among the hundreds of pre-millennials were DJ Black, Sammy Forson, Andy Dosty and Nii Ayi Tagoe with Lexis Bill as MC.

They did not disappoint.

Dance routines like The Running Man, Electric Slide, Macarena among others spoke volumes about the prowess exhibited by the men behind the turntables.

If Haddaway’s ‘What Is Love’ did not strike a nerve during the open-air party, ‘Jump’ by Kriss Kross would get you on your feet. Reggie Rockstone’s ‘Eye mo de anaa’ among others were also on rotation on the local playlist, making sure there was no dull moment.

Fans were also treated to great music from some surprise artistes. Backed by resounding sing-alongs from the cheerful gathering, veteran Ghanaian musicians such as Kwaw Kese, Obour, Ex-Doe, Prince Bright and Shoetan of Buk Bak fame did not hesitate to elicit nostalgia by laying down some hits from the 1990s.

A vividly emotional Prince Bright later eulogised The Multimedia Group and Joy FM for their instrumental role in shaping his musical career as the company turns 25 this year.

One of the attendees, Gifty Andoh told Myjoyonline.com: “I haven’t been this excited in a long time. To have all this fun bundled in one night is crazy. I am not missing next year’s edition.”

Another patron, Miles was impressed by the turnout and has promised to return next year.

“You guys just know how to do it. It was yet another hit. Look at the numbers alone. I leave here satisfied,” he said.

For an event which is supposed to shepherd in the New Year’s entertainment calendar, it will be one to remember.

I daresay this will be the yardstick by which subsequent shows in this new decade across the country will be measured.