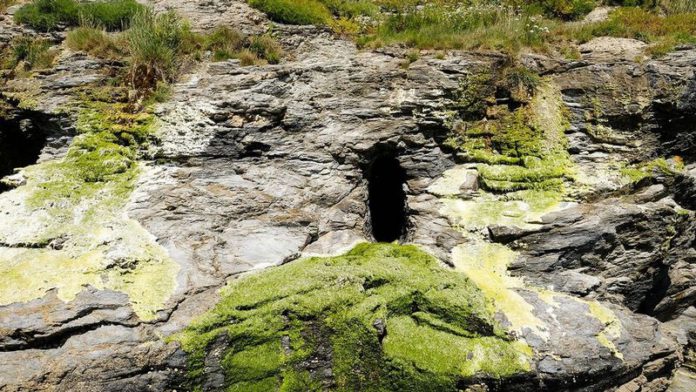 A Cornish cliff face, far away from any car parks, toilets or cafes, is home to an unusual amenity; a Georgian bathroom carved into its rockface.

The bathroom, which is believed to be more than 220 years old, is hidden away in a cave on a secluded beach, designed to offer privacy to a Cornish gentleman and his wife when they wished to take a bath by the sea.

Strangely, for such an exceptional feature, it does not seem to have been documented until the end of the 20th century, and very little has been written about it since.

Situated four metres back into the solid rock of the cliff, a narrow tunnel opens out into a small chamber in which there sits a rock-cut bath, roughly one metre deep and always full.

According to Cornwall Live , the bath was built at the end of the 1700s for the botanist John Stackhouse, who owned nearby Acton Castle.

By the end of the 18th century, the benefits of bathing in sea water and in spring water were widely recognised by the aristocracy, and as a botanist spending time in the spa town of Bath with a special interest in marine algae, this growing health obsession did not escape the attention of Stackhouse.

After he married Susanna Acton in 1773, John Stackhouse had Acton Castle built above the remote Cornish cove where he found himself spending most of his time, studying seaweed and marine algae.

At some point between 1775 and 1804 (when he retired and moved to Bath,) Stackhouse had two rock-cut baths carved out for him down at the cove. Some say it was because he was suffering from rheumatism, others say that they were for his wife, Susanna.

The first bath was a tidal seawater pool, cut into the rock on the beach with steps and a drain to keep the water at a constant level. These outdoor baths cut into rock at beaches can be found elsewhere in Cornwall, such as at Portreath, where there are seven of them.

However, the second bath, inside a cave that had been carved out of the cliff, with its own constant flow of natural spring water, was unlike anything else.

Roughly two metres above the beach, the entrance to this peculiar bath resembles an adit to a mine shaft- clearly man made in appearance, but with bright green moss and algae cascading out of it and down the rocks to the ground. Originally, there were steps cut into the rock, leading up to the entrance, but these have been worn away by the sea over time.

The small tunnel, which is about 40cm wide and 1.80m high, leads back into total darkness. The only clue of what is at the end is the dripping of the natural bath tap that has been left on for two centuries.

Venturing into the tunnel, as daylight fades, the rich greens and reds of the algal biofilms on the rock begin to glow. The floor of the tunnel is carpeted in a wet green moss.

Four metres in, the tunnel opens out into the chamber which is almost entirely taken up by the bath, and has very little light, apart from that coming through the tunnel, and down from a man-made vertical shaft designed to feed the natural spring down into the bath.

The first detailed documentation of Stackhouse’s cave bath is considered to be by Michael Tangye, when he wrote about ‘Rock-cut baths in Cornwall’ in the Cornwall Archaeological Society’s 1997 booklet. In it, he writes:

“This remarkable and unique feature lies within the rock cliff face at the centre of the cove.

“Here, several feet above the beach level is a tunnel which at first glance resembles a mine adit outlet. It appears to have been originally approached by rock-cut steps ascending from the beach on the south side, of which only one, at the top, has survived sea erosion.”

The vertical shaft that feeds the bath with slightly alkaline spring water is a sophisticated part of the design, and is described by Tangye as such: “In the north-west corner of the roof, a rectangular chimney-like shaft, again cut from the solid rock, ascends some 20ft (6.1m) to the cliff top. Fresh water, from a small stream, drains into this, falls down the shaft, then through a hole in the stone roof of the chamber, 2ft 3ins (0.69 m) by 1ft 7ins (0.48 m), and into the bath beneath. The constant overflow drains along the approach tunnel to the exterior.

This fresh water bath, situated within its dark, cold and secluded chamber must have been again created for John Stackhouse and Susanna, his wife.”

There have been suggestions that for such a sophisticated natural spring-fed bath system to be built, John Stackhouse would have employed experts from Bath, where he also chose his architect for Acton Castle. However, the local knowledge and skill of tunnelling into cliffs in that area was unmatched at the time.

Stackhouse had appointed local man John Carter as caretaker and key holder of Acton Castle, and entrusted him with the property for the long periods when he was not there. But along with his brother, Harry, John Carter was a notorious smuggler, calling himself the ‘King of Prussia’ and creating a maze of smuggler’s tunnels on the south coast. Whether John Stackhouse was aware of Carter’s smuggling activities is unclear, but he would certainly have known his skill with a pick axe.

Regardless of who built this hidden bathroom, it is unlikely to become popular again soon. Without the long exposures of the camera revealing the warm colours inside, the reality is that this space is cold, dark and teaming with spiders and marine bugs like sea slaters.

With the steps eroded away, access is treacherous and the strange echoes inside the cave can be unnerving. But for an 18th century algae-loving botanist who wanted some privacy on his favourite beach, this bathroom would have been heaven.