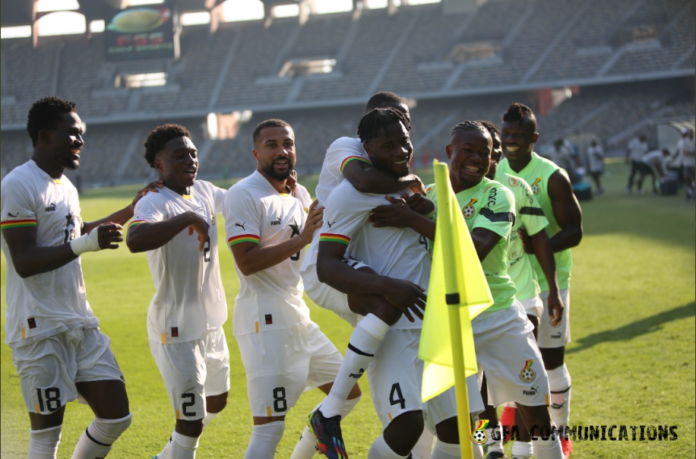 The Black Stars of Ghana recorded a hard-fought 2-0 win over Switzerland in a friendly game on Thursday morning at the Zayed Sports City Stadium in Abu Dhabi.

Otto Addo fielded a strong starting squad for the final preparatory game with Salis Samed and Daniel Afriyie Barnieh making their debut in a 3-5-2 formation.

The Black Stars controlled the first half despite the pressure from the Swiss.

In the second half, the Black Stars started the game strongly and threatened the post of the European side.

On the 69th minute, Mohammed Salisu scored a header to break the deadlock for the team.

The Black Stars kept their composure and kept on threatening the post of their opponents.

The introduction of Kamal Sowah, Kamaldeen Sulemana, and Semenyo changed the frontline of the team.

On the 74th minute, Stade Rennais winger, Kamaldeen made a run from the centerline and dribbled through the 18-yard box but his strike was was blocked by the Swiss goalkeeper. However, Semenyo was just at the spot to hammer the ball into the net to make it 2:0 for Ghana.

The Black Stars held the nerves and made some incursions in the latter part of the game but the game ended 2:0 in favor of the Black Stars who are making their four appearances in the history of the Mundial.

The Black Stars will hold their final training on Friday morning and evening before arriving in Doha on November 19 for the tournament that has been slated for November 20 to December 18in the Gulf country.

Ghana, who have been housed in Group H, will open their campaign against Portugal on November 24 at Stadium 974 in Doha.

The four-time African champions will wrap up their group stage adventure with their much-anticipated encounter with Uruguay at Al Janoub Stadium in Al Wakrah.