According to him, a poster circulating on social media is a “Luciferian conspiracy” by his opponent.

In a press statement copied to Adomonline.com on Tuesday, September 15, 2020, Hon. Baah Agyemang said a news report with the headline, ‘Kwadwo Baah Agyemang goes Independent ahead of 2020 polls’ is false.

“I wish to state for the records that this news reportage is absolutely false. It is a Luciferian conspiracy hatched obviously by some unscrupulous persons allegedly aligned to losing Hon. Andy Appiah Kubi to vitiate my hard earned political reputation,” he said.

Read the full release below.

Re: Kwadwo Baah Agyemang goes Independent ahead of 2020 polls

My attention has been drawn to some malicious media reportage which suggest that, I, Kwadwo Baah AGYEMANG, have declared my intention to contest the December polls as an Independent candidate.

I wish to state for the records that this news reportage is absolutely false. It is a Luciferian conspiracy hatched obviously by some unscrupulous persons allegedly aligned to losing Hon. Andy Appiah Kubi to vitiate my hard earned political reputation.

Under section C of the guidelines and application forms for the conduct of the 2020 NPP Parliamentary primaries, all Aspiring Parliamentary Candidates (ASP) were made to sign an undertaking and assured the party with utmost faith, that, in the event of our being unsuccessful at the primaries, We shall not offer ourselves as Independent candidates on the ticket of any other party for the purpose of election 2020.

I wish to state again for the records that I, Kwadwo Baah AGYEMANG, a government official and an Aspiring Parliamentary Candidate for the NPP in the Asante Akyem North Constituency, for election 2020, has always held the values of the great Danquah-Dombo-Busia tradition and would under no circumstances despise the above undertaking.

Furthermore, on the 18th of June, 2020, some 145 Polling station executives filed a suit and an injunction against the NPP Parliamentary primaries in the Asante Akyem North Constituency. As a result, nobody can hold himself up as the Parliamentary candidate for the party in the Constituency until the finality of the case in court.

Indeed, on Friday, 24th July, 2020, when the case was moved in court, Nana Obiri Boahen, the lawyer standing in for the party, stated categorically that, the party is yet to hold it Parliamentary primaries for the December, 2020 elections in the Asante Akyem North Constituency and that this can only be done after the final determination of the case in court. I wish to further state that I am a law abiding citizen and a responsible party loyalist. I have and would at all times uphold the rule of law.

The above having been said, it is worthy of note that, the news reportage suggesting my independent candidature for the December polls, is a contrived mendacity and should therefore be treated with the contempt that it deserves.

I wish to assure the NPP and all my ardent supporters that I, Kwadwo Baah AGYEMANG, is not distracted by these malevolent schemes. I remain focused and working hard to ensure a resounding victory for the party in the December, 2020, polls, whilst keeping faith that the battle is the Lord’s. 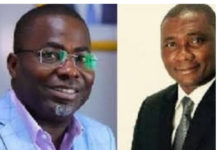 NDC finally responds to Worlasi after using his song for campaign...