The newly-elected General Secretary of the New Patriotic Party (NPP), Justin Frimpong Kodua, has promised to crack the whip on party officials who publicly support any flagbearer aspirant ahead of the NPP’s Presidential primaries.

According to him, such conduct by party officials does not only flout laid down party rules, but significantly contributes to factionalism and acrimony within the party, further denying them the momentum to breaking the eight.

To discourage party officials from conducting themselves in such a manner, the General Secretary has vowed to remain neutral before and during the election process, and to remain firm when sanctioning culprits without fear or favour.

Speaking on JoyNews’ PM Express, Justin Frimpong Kodua stated that he has already started sending the message out; warning party officials against any such misconduct.

“As General Secretary of the New Patriotic Party, I will not take sides in the Presidential primaries, and I will be an honest referee, I will make sure that the rules, the processes that leads to us selecting our Presidential candidate will be free, fair and transparent.

“So I’m starting that gospel message to everyone that for me as General Secretary I will not take sides. So it’s something I will push through the committee, NEC and even National Council that party officers, particularly national officers, regional officers, constituency officers should not come out to support particular candidates, and we should allow the party people. 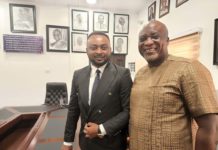