A member of the Finance Committee in Parliament, Dr Stephen Amoah, has painted a picture of the current state of the country’s economy.

Speaking with Samson Lardy Ayenini on Newsfile, Saturday, he related the state of the country’s economy to a “child with sickle cell’.

He said such a weak and ailing economy does not need short-term measures by both NPP and NDC governments since the structural bottlenecks in the economy have been in existence for long.

“Small push then there is a crisis. NDC and NPP have been trying to use a short-term approach to solve these problems that will not work. Let’s be very honest with ourselves. It will never work,” he said.

The country’s total public debt stock stood at about ¢344.5 billion as of November 2021, a situation experts have described as alarming.

Fuel prices have also crossed the ¢10 per litre mark amid the freefall being experienced by the local currency. The country’s Debt to Gross Domestic Product as of December 2021 stood at 80%.

But the Nhyiaeso MP believes that long-term measures devoid of politically-oriented motives would help revive the ailing economy.

“Until we accept these facts and take politics out and design a long-term approach to solving some of these problems…it will work out,” he stated.

Meanwhile, Finance Minister, Ken Ofori-Atta, has blamed the situation on the inability to approve portions of the 2022 budget especially the E-Levy and the ongoing war between Russia and Ukraine.

“It should also be stressed that several governments in both developed and developing countries are busily coming out with various prescriptions to bring their economies back on track, after the devastating impact of COVID-19 which distorted global supply chains, and the ongoing Russia-Ukraine war,” he said at a press conference in Accra on Thursday.

Ken Ofori-Atta at a press conference on Thursday in Accra, announced government’s new expenditure measures to raise more revenues and stabilise the economy.

The Minister expressed optimism that the measures will go a long way to cushion the citizenry amid the economic downturn. 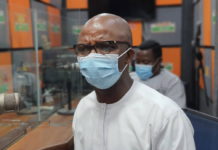 Nhyiaeso MP turns himself in to police, faces court for road traffic offence