According to him, there was a desperate need to procure the vaccines at the peak of the pandemic, hence he invoked Executive Instrument 61, approved by Parliament for the contract with the United Arab Emirates royal.

However, he said his ministry had plans to submit the agreement to Parliament for the needed approval in accordance with Article 181 clause 5 of the 1992 constitution.

Mr Agyemang-Manu disclosed this on Monday when he appeared before the nine-member Ad-hoc Committee probing the procurement of Sputnik-V vaccines.

He argued that the contract with Sheikh Al Maktoum was the best for the country but was quick to add he could’ve signed a better deal today.

The government engaged Al-Maktoum through a contract that saw the country procuring Sputnik V vaccines at a unit cost of $19 through which 20,000 doses have already been supplied.

Meanwhile, the contract has been terminated after Sheikh Maktoum stated that “he is struggling to get the vaccines due to global shortage.”

Listen to the Minister in the audio attached above: 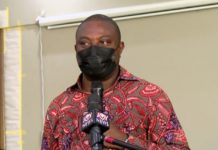