Captain of the Black Stars Asamoah Gyan was stunned at his kids ability to rap Big Shaq’s ‘Man’s not hot’
“Man’s Not Hot” is a song by British comedian Michael Dapaah. It is his first single released under the name Big Shaq.
The song saw commercial success, peaking at number five in the United Kingdom.
The song has been certified silver in the UK by the BPI, indicating 200,000 combined sales and streams.
Asamoah Gyan shared the video on his instagram page and wrote: I didn’t know I had rappers in my house ooo🙆🏻🙆🏻🙆🏻🔥🔥🔥🔥😂😂😂 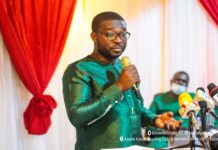 Over 140 Togo nationals grabbed for crossing to Ghana illegally