Church service at the Akapoliso branch of the Church of Christ at Obuasi in the Ashanti Region was disrupted by a suspended church member.

The livid member whose name was given as Frank Ayittey stormed the church Sunday morning bring activities to a haul.

He claimed his suspension will not hold until he is given the chance to confess his sins.

His only crime, Mr. Ayittey revealed is worshiping with another branch of the Church of Christ which his mother church claimed is not part of them.

They explained that the doctrines of the church he is currently worshipping with is different from the true Church of Christ.

Based on this, he was handed a four-month suspension with hearing and efforts to get a fair hearing proved futile.

Therefore on Sunday, May 28, Frank Ayittey in an interview with Adom News’ Isaac Normenyo said he decided to disrupt service to enable him confess his sins.

But in a quick rebuttal, General Secretary of the Church, Joseph KA Gyapong explained that Mr. Ayittey was been suspended for violating laws of the church.

He said the actions and inaction of the angry man flouted the laid down rules of the Church of Christ.

“He was suspended for dishonouring God so we will not allow him to come to church to influence the good flock” he stated.

Mr. Gyapong also described as false claimed by Frank Ayittey that he had not been given a fair hearing. 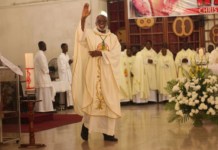 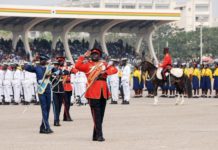