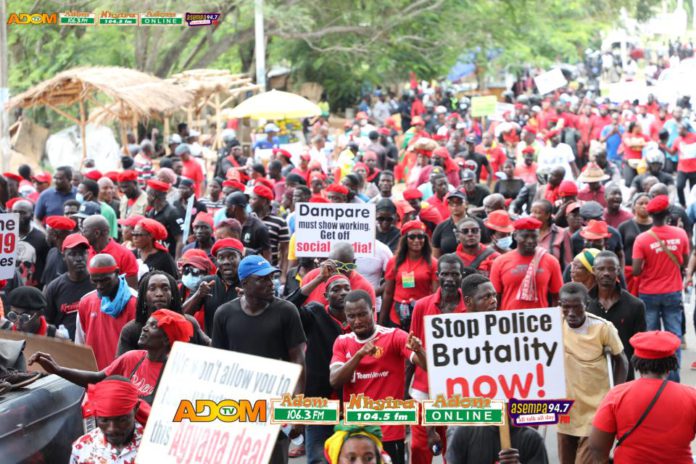 Founder and Leader of All People’s Congress (APC), Hassan Ayariga, has chastised organisers of Arise Ghana demonstration for failing to provide solution to challenges they cited as basis for their demonstration.

According to him, the government is aware there is crisis and is putting measures in place to address it.

“Government and everyone in the world now knows there are challenges and what government needs now is solution but the organisers failed to provide any solution to the challenges they cited as basis for marching on the street,” Mr Ayariga said.

He stated again that, “when you raise a problem, you should be able to provide solution to the problem” which the #KuromAyehye demonstration organisers failed to do.

Arise Ghana, staged a two-day demonstration to register their displeasure towards government for economic hardship and other matters facing the country.

Day one of the demonstration was characterised by chaos as demonstrators clashed with police leading to some civilians and men in uniform sustaining various forms of injuries.

This was as a result of police trying to prevent the demonstrators from using certain routes.
The second day was, however, successful as both security personnel and demonstrators understood each other as to which routes should be used.

The 2020 flagbearer of the APC, Mr Ayariga, speaking with Kwesi Asempa on Adom TV’s Current Affairs Show, The Big Agenda, said all Ghana needs now is solution to the numerous problems but staging demonstration over a problem and not giving solution makes “your protest unnecessary.”

Mr Ayariga, commenting on the violence that characterised the day one of the demonstration, stated that, both police and the demonstrators erred.

“If you stage a demo to register your dissatisfaction over leadership failure, you must be law abiding but attacking security officers showed you have also failed whereas the police also did not act in good fate,” Mr Ayariga stated.

He stated again the police are trained on crowd control and to also protect lives and property so firing tear gas at the demonstrators was also a flaw on their part.