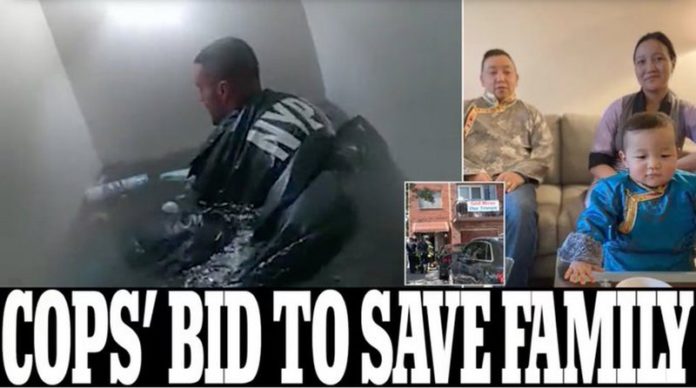 Harrowing bodycam footage capture the moment a NYPD officer tried unsuccessfully to dive into a flooded apartment to rescue a family who drowned inside as Ida brought record rainfall to New York.

The gut-wrenching video shows the policeman standing in dirty water nearly reaching his shoulders in the staircase leading to the door of the family’s basement apartment, with a light on overhead.

He is surrounded by water that is so deep the door to the family’s apartment is completely submerged beneath it, while an unseen colleague films on their bodcycam.

Heartbreakingly, plush children’s toys float past as the cop tries to attempt a rescue, with a can of Lysol disinfectant spray also seen bobbing on the surface.

The officer eventually dives into the water for several seconds before the other officer whose body cam is recording also goes underwater.

His colleague, who stood back slightly and filmed the rescue attempt, temporarily went underwater, with the lens capturing just how dirty and murky the liquid was, with visibility close to zero.

The police department confirmed that the bodies of three people were found inside the underground apartment having ‘died from drowning.’ They belonged to Ang Gelu Lama, 50, his wife Mingma Sherpa, 48, and the Nepalese couple’s two-year-old son, Lobsang ‘Ang.’

NYPD confirmed that without special equipment the officers on the scene ‘made valiant efforts but that ‘locked doors, rising water level and live electricity’ prevented them from successfully entering the flooding apartment.

The officer then called FDNY to aid them in their attempted rescue but it was too late for the family of three who were found dead in their basement apartment on 64th Street in Woodside, Queens.

‘The water is coming in right now…The water coming in from the window!’ Sherpa purportedly yelled down the phone to Sledge, who lives on the complex’s third floor.

Choi told The Times that she urged the family to ‘get out’ and make their way upstairs but when Choi tried to call back minutes later there was no answer.

The basement apartment features just one door, and occupants can only leave by climbing the external flight of stairs where the officers attempted to break in.

Deborah Torres, 38, who lives on the first floor of the complex, says she believes the staircase would have been cascading with rushing water, making it impossible for the family to escape due to the pressure it was exerting on their front door.

The water in her first floor apartment began to rise to her knees and float her furniture as the family was still trapped in the basement.

‘I wasn’t paying attention to my things — I was so worried about the family downstairs,’ Torres told The New York Daily News. ‘It was so fast. My daughter started to scream, ‘Mommy! Mommy! The water’s coming up!’

‘I think the pressure of the water was too strong that they couldn’t open the door [to get out and up the stairs] ‘ Torres explained. ‘The [basement] was just like a pool with stairs.’

Torres said that she could hear her downstairs neighbors calling the landlord who begged them to leave but claimed that the rising waters were too strong for any one to come in or out of the basement apartment.

She told The Times ‘It was impossible.’

Martha Suarez, 53, Ang’s teacher, was overcome by grief when she arrived at the family home Thursday morning for her daily session with baby Ang at his home. She burst into tears as she processed the death of her tiny pupil and his immigrant parents.

‘The baby was so cute,’ she told The New York Daily News at the scene.  ‘Just a happy boy, very nice family … They didn’t call me, they didn’t cancel me, so I was coming as usual.’

‘This is too hard for me,’ she said as she stood outside the home blocked off by police tape.

New York had 17 confirmed deaths, four in Westchester County and the remainder in New York City. In New York City, two people perished in separate instances in Brooklyn and 11 people died in Queens.

Of the 11 people who drowned in their apartments in Queens, 10 of them were living in illegal basement residences.

A 2008 study by the Pratt Center for Community Development found that 114,000 New Yorkers lived in illegal basement apartments but researchers say the number is now likely to be much higher.

‘The problem is that because these spaces are illegal, because there are big fines associated with them, because the tenants need the space, the homeowners need the income, no one wants to talk about it,’ said Rebekah Morris, who leads basement legalization work at Pratt, told AFP.

‘So it’s very, very difficult to assess what the actual numbers are but we know anecdotally that it’s very high,’ she added.

The problem is becoming more acute as New York’s population grows but adequate housing fails to keep up.

Over the past decade, the city added 629,000 people, bringing its population to more than 8.8 million, according to US census data released last month.

All but one death in this week’s storm occurred in the borough of Queens, which has a high immigrant population, including many undocumented workers from Central and South America.