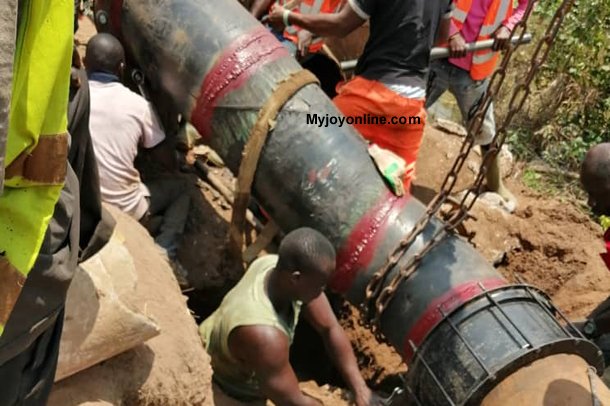 A technician with the Ghana Water Company Limited in Ho has died during repair works on the main pipeline that conveys water from the production point at Kpeve to the Volta Regional capital.

Christopher Somey, 28, is reported to have drowned in the Tsawe River close to where the broken pipeline was.

Head of public relations at the GWCL, Stanley Martey confirmed to JoyNews that “Somey died in line of duty while we were working to fix the pipeline.”

“The police are currently investigating the circumstances leading to the drowning of the worker who was in the company of two others during the repair work at the site,” Joy News correspondent, Mawuli Yevu reports.

Shortage of water in Ho

The water crisis in Ho, however, continues unabated. Residents say the last time there was such shortage of water in the city was over 30 years ago.

According to officials of the Water Company, the damage was occasioned by the washing away of two concrete pillars holding the pipeline at river Tsawe near Akrofu.

This has caused hardships for the townsfolk as the situation has gone beyond 11 days.

Productivity has taken a nosedive. Workers have to spend hours in long queues at wells and boreholes to get water.

In areas where there are none of these, they rely on nearby streams.

“I go work, say, 10 am or 11 am because I have three kids in the house and I have to get water to bathe them, take them to class before I go to work. If the water I get in the morning is not sufficient, I got to close early.” said a resident, Maxwell Budu.

The GWCL has meanwhile, apologised for the inconvenience.

They said in a communiqué that “the challenge with the water situation is completed and water production and pumping has begun and we are assuring our cherished customers that the situation will normalise by close of day on Wednesday, August 28, 2019.”