The Nyazura community of Makoni District in Manicaland was left in a shock after a man identified as William Mubvumbi mysteriously died while digging a grave at a funeral.

It is suspected that William Mubvumbi died of suspected food poisoning.

It is alleged that the villagers who had gone to the cemetery were served fufu and beef in a plastic container.

After eating the food, the villagers were left uncomfortable, suffering from stomach ache, and vomiting.

William, however, died before arriving at the hospital.

According to Pindula, a District Medical Officer confirmed the sad news, revealing that some villagers were hospitalized following the incident and later discharged.

“We collected samples which we will forward to pathologists who will determine the type of poison that claimed his life.
Food poison is broad and the specialists will determine whether it was chemical, bacterial or something else.
The other 12 affected people who came on Saturday were treated and discharged on Sunday. They were all stable”.

A family spokesperson believed that the incident wasn’t food poisoning from any villager but rather it was the containers which were already contaminated.

“Food was prepared for the gravediggers, unfortunately, the beef stew was put in a plastic bucket and sealed to avoid spilling it on its way to Nyazura.
From what we have learnt, the food was not supposed to be in a plastic container, and delays in serving it rendered it poisonous. More than 50 people, including Emas’ son, consumed the food.

“In fact, the person who was serving the food is among those affected. We mourn with the Mubvumbi family over the loss of their relative.” 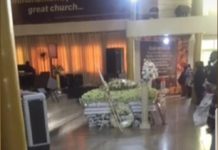