Minority Leader, Haruna Iddrisu, has accused the government of making a one-sided assessment in its attempt to amend article 243(1) which allows for the election of Metropolitan, Municipal and District Chief Executives (MMDCEs) by the electorate.

Mr Iddrisu explained that the bill brought to Parliament by the government for the amendment of article 243(1) is flawed because it is not comprehensive and if passed will not be doing justice to an elected MMDCE.

“The President being able to fire MMDCEs though they have been elected defeats the purpose of the amendment, so if you amend article 243 (1) without amending article 243 (3), then you are doing cherry-picking halfhearted constitutional amendment,” he said in an interview on Joy News’ Super Morning Show.

The legislator cited articles 246 (2), 249 and 242 which are fundamental to amendment of the bill but the President has remained silent on them

Audio: To whom much is given, much is expected – Minority leader tells NPP 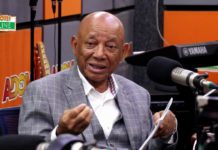