He explained that the move will not only be about the shares but “more experience in the exploration agenda of GNPC.”

“The government is going to support you 100 per cent,” he said on Tuesday.

IMANI Africa, Africa Centre for Energy Policy and other petroleum energy experts are among the group of CSOs raising red flags about the arrangement in terms of valuation.

They have pointed out other transactional and policy issues which may leave the GNPC with overpriced assets on its balance sheet if not addressed properly.

Over a dozen of them want Parliament to step in and subject the deal to rigorous scrutiny to ensure that the country’s interest is not lost.

But swearing in the newly-constituted board of the GNPC, the Energy Minister said government has a deliberate plan to grow through the Exploration & Production Company Ltd (Explorco).

Explorco is a strategic vehicle through which GNPC intends to build rapid local capacity and technology transfer and attain the goal of a world-class operator.

According to him, this subsidiary of the GNPC will be utilised to ensure maximum local participation in the oil and gas industry, hence the decision.

“We cannot afford a situation where Ghana will have all this wealth lying there unutilised and Ghanaians will still be wallowing in lack of energy access and poverty,” he told the new board.

The Minister urged the new GNPC board members to ensure that the involvement of local companies and players are prioritised as part of their mandate.

“As board members, every decision you take that has an impact on the ability of more Ghanaians to participate in our God-given wealth, we must look at it critically and see that those Ghanaians are benefiting,” he added.

Meanwhile, Board Chairman of GNPC, Freddie Blay, said the challenges facing the industry are not lost on them.

He assured that the board will work assiduously towards maximising the country’s oil resources. 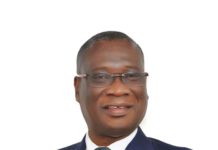