Multiple award-winning rapper, Michael Owusu Addo, who is known professionally as Sarkodie, says the year 2023 is a year of giving back to the people who have made him who he is today.

Speaking in an interview with JoyNews’ Becky on the sidelines of the recently ended Black Star Line Festival, the ‘countryside’ hitmaker said “performances and releasing music box already ticked. There’s more to you when given this much attention and you can only give back to who and what made you.

“I have been saying this for a while, but I’ve been working on other things aside music, so the energy will be more of giving back to this industry that made me Sarkodie.”

The rapper added that this year as part of giving back, he will be paying attention to his fanbase (Sark Nation). He wants the group to benefit as much as they can from the brand Sarkodie.

“Sark Nation, I really appreciate your support. This year, let’s go harder, I want to involve more of the Sark Nation so we can make money together. I want us to have activations where Sark Nation is making money.”

Sarkodie is a Ghanaian rapper, songwriter, and entrepreneur from Tema. His contributions to the Ghanaian music industry have earned him numerous accolades, including the Vodafone Ghana Music Award for “Artiste of the Decade”.

He was announced the first winner of BET’s Best International Flow artiste at the 2019 BET Hip Hop Awards.

He is also considered one of the major proponents of the Azonto genre and dance and one of the most successful African rappers of all time. 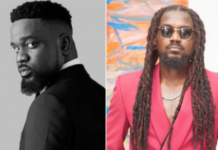