A Nigerian man, Bamidele Aribanusi, has been accused of assaulting his 11-year-old daughter for allegedly refusing his sexual advances in Ketu area of Lagos State.

It was gathered that the 60-year-old retired driver attacked the minor with a wood filled with nails after she went to the wrong shop for an errand she was sent to take care of.

According to a source: “This is not the first time he’s brutalising her. In fact, he beats her on a daily basis and the little girl just confirmed it to us today that he always puts his finger in her private part whenever no one is around.

“The girl’s mother is dead and Mr Aribanusi, who’s her biological father is an alcoholic and a smoker. Yesterday, he used a wood filled with nails to hit her on her head. After he left the house, the neighbours took her to the hospital to treat the wound.

“When he came back and saw her wound had been treated, he started hitting her again and locked her up in the house. He even stopped her from going to school today and from leaving the house.”

The victim stated that her biological father becomes aggressive anytime she refuses his sexual demands, and lashes out at her at the least provocation.

As a result, the victim is partially deaf and has wounds all over her body.

My wife falsely accused me of rape, had me arrested two months after arriving in Germany – Man reveals 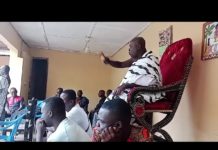