Ghana is now exporting electricity to her West African neighbours, La Cote d’Ivoire after just seven months of the Nana Akufo-Addo-led administration, Minister of Information, Mr Mustapha Abdul-Hamid, has disclosed.
He said the government had managed to stabilise the power supply situation after the country went through about four years of power crisis, which crippled many businesses.
“Without power, there is no way the industries can operate because power is what powers industries.
“The power situation is very stable in our country, we use to import power from Cote d’Ivoire to supplement what we produced in Ghana, today we’re exporting power back to Cote d’Ivoire again just seven months in government,” he stated.
He said the government had good intentions, zeal and commitment to resuscitate the economy and would get the economic fundamentals right to enhance the industrialisation drive.
Mr Abdul-Hamid said this at the signing of a Memorandum of Understanding (MoU) between Government and The Business Year magazine, in Accra, on Wednesday.
The Information Minister initialled on behalf of Government while Madam Florencia Solano, the Country Manager of the Magazine, signed on behalf of her organisation.
The MoU implies that the international magazine would publish Ghana’s business and industrial potentials in its various editions while Government facilitates interviews and provide other relevant data for publication.
Madam Solano, on her part, said her outfit was aware of the changes happening in the country to diversify the economy and would, therefore, provide the platform for Ghana to inform the global audiences about the opportunities here.
The multinational magazine comes out once every year and has a presence in 30 countries and supplied its publications to businesses, corporate organisations and individuals.
It also has a website and newsletters that carry some of its publications.
The magazine provides accurate, timely and country specific economic and business data with highlight on statistics, news, laws and tax legislations. 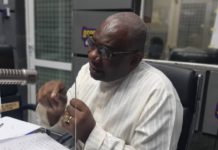 Boakye Agyarko wades into dualisation of major roads in Ghana