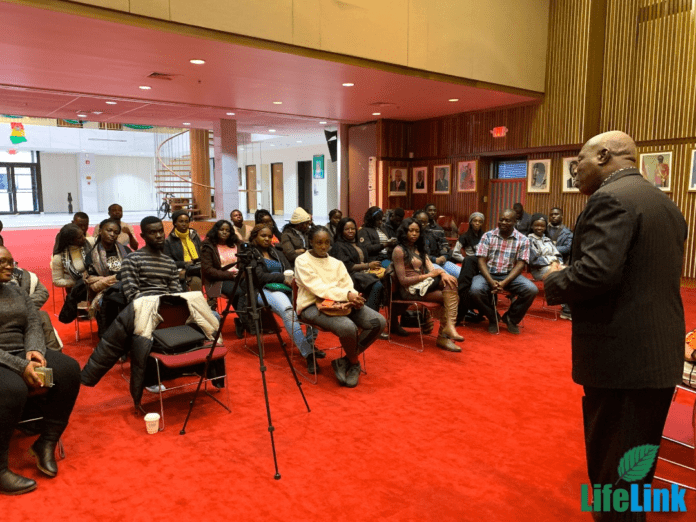 The government of Ghana is making frantic effort to reposition the country as regional center of academic excellence, technological innovation and human capital development.

Consequently, the necessary infrastructures and policies are being put in place towards the attainment the objective.

Ghana’s Ambassador to the United States of America, H.E Dr. Baffour Adjei Bawuah announced this when a delegation from Lifelink Friendship Schools –Ghana paid courtesy call on him at the Embassy of Ghana in Washington DC.

According to Ambassador Bawuah, aside seeking to be a major competitor in many other sectors of the economy, government was making what he described as conscious and deliberate efforts to ensure educational advancement.

“ As you may be aware, back home significant progress is being made without compromise to access and this is so important”, Ambassador Bawuah told the visiting students.

The students, numbering 39, were in the United States to represent Ghana in this year’s Harvard MUN 2020 at Harvard University in Boston where they won big in the Resolution Project Awards which seeks to promote innovation and entrepreneurship among young people.

Winners are offered funding as fellows of the Harvard MUN with transformative social venture ideas.

All five projects by the Ghanaian students made it to the final stages of the awards where students had to pitch their ideas before a panel of judges made up of an array of academicians and industry captains.

In the end, four projects won honoursand funding for implementation of their plans.

They are the Anyemi Literacy Project by Elsie Tetteh of KNUST and Keith Cleland and Stephanie Darko both from the University of Ghana which seeks to enhance the literacy skills of pupils in an orphanage located in the Eastern Region of Ghanawhile Booksville Ghana, a project by Ewurama Jenkins and SedinamBotwe from University of Ghana seeks to offer mobile library services to Ghanaian children.

The third project known as The PADucation Project, an initiative of SamuelBoakye-Appiah of University of Ghana and his two other colleagues, Kofi Boakye-Appiah and Michael Oppong both from KNUST focuses on promoting good menstrual hygiene and education to students in NingoPrampram in the Greater Accra Region of Ghana.

The last project wasSave Our Soles, an initiative to provide footwear to school children in Argoko, a community in rural Volta Region of Ghana who walk 5km everyday barefooted, was recognized for honour. It was conceived by Susan SenaAzasoo (Radford University), EwoenamEsiAbaloo (University of Ghana) and EmmanuellaBiney(KNUST).

While in the U.S, the students also toured educational and historical installations including the Capitol Hill, the White House and the Ghana Mission in Washington DC.

The students also had the privilege of interacting with Ghana’s Minister for Education, Dr. Mathew Opoku-Prempeh who was on a visit to the United States. He congratulated them for making Ghana proud and asked them to take their academic lessons serious.

The delegation was led by the Executive Director of Lifelink Friendship Schools-Ghana, Mr. Ernest GyimahDanquah and Mr. KwasiOkrah, a Faculty Advisor.

They have since returned to Ghana.