The Ghana Education Service (GES) has issued a subtle threat to teachers who are currently striking over government’s failure to pay salary arrears owed them.

The Chairman of the GES Council, Michael Nsowah, who issued the threat in an interview on Adom FM’s morning show Dwaso Nsem Tuesday, said should the teachers continue to their industrial action, the state will be forced to employ new teachers.

He said inasmuch as government will not dispute the rights of the teachers to protest, it will also look on as such actions affect the academic work of students.

“We are still monitoring the situation and if they still continue with their strike action, we will then be forced to recruit new teachers,” Mr Nsowah said.

He added that there were people with very good certificates who are looking for teaching jobs and government wouldn’t hesitate to employ them to teach.

Government, however, failed to take the threat seriously, forcing the teachers to carry out the threat by staying out of the class effective Monday December 9, 2019.

Mr Nsowah insists that as of September 2019, the GES had effected payments of full salary arrears to about 87,556 teachers, representing 95 per cent of the affected teachers.

Listen to the GES official in audio above 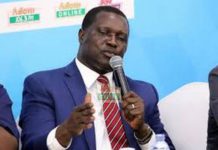