Gabby Asare Otchere-Darko, a staunch member of the New Patriotic Party, has visited the Majority Leader, Osei Kyei-Mensah-Bonsu, at his office after the MP slammed him (Gabby) over claims that the Suame MP wants the Finance Minister, Ken Ofori-Atta sacked to take over his job.

In a viral photo, the two were captured together with broad smiles on their faces a day after the Majority Leader went hard on Gabby Otchere-Darko.

Gabby Otchere-Darko, in the company of O.B. Amoah, the deputy minister for local government, visited the majority leader in his office in Parliament on Wednesday, November 16, 2022,

Mr Otchere-Darko has disputed claims by Kyei-Mensah-Bonsu that he said the Majority Leader was behind moves to get the Finance Minister removed.

Responding to reports that the Majority Leader also accused him of trying to undermine his attempt to be the Suame MP, Mr Otchere-Darko said on Facebook: “I have since sent him a message on this denying same.”

Reports indicated that Mr. Kyei-Mensah-Bonsu said Mr Otchere-Darko had called him the ringleader behind the NPP MPs calling for the resignation of the Finance Minister.

These claims by Mr Otchere-Darko are said to have come during a broadcast on Asaase Radio.

Meanwhile, the two men seems to have resolved their issue after a member of the NPP posted on his Facebook page that Mr Otchere-Darko had visited the Majority Leader.

He wrote: I joined Gabby Asare Otchere-Darko this morning to the office of the Leader of our party in Parliament, Hon Osei Kyei-Mensah-Bonsu (MP). My two Seniors were at their usual best. We are NPP. Difficult times rather strengthens our bond and our collective resolve. President Akufo-Addo and Dr. Alhaji Mahamudu Bawumia will see us through. This too shall pass. Let’s stay together. 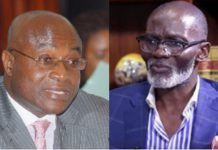