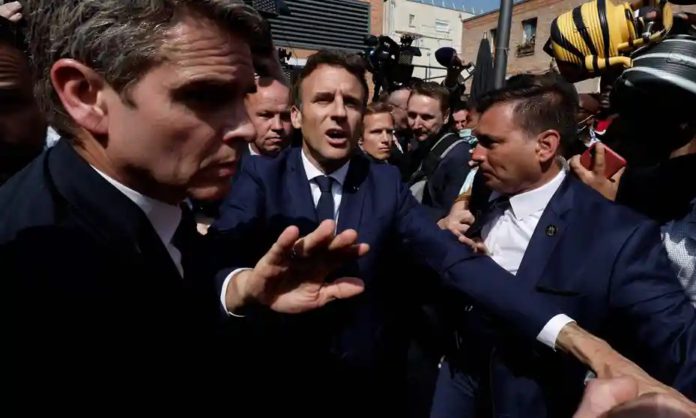 Emmanuel Macron narrowly missed being hit by a bag of tomatoes during a surprise visit to a working-class area north of Paris, as he promised a new style of “listening to people” after his re-election as president.

In his first public appearance since Sunday’s vote, Macron strolled around a food market in the town of Cergy, north-west of Paris, shaking hands and posing for selfies. Most people were friendly, some shouted congratulations and others asked for help in finding a job, dealing with health problems or making ends meet.

But at one point there were briefly boos, and a bag of tomatoes was thrown towards Macron’s back but missed. A bodyguard opened an umbrella to shield the president, who quickly sidestepped the projectile and continued to greet people and shake hands.

The Élysée Palace said the trip was Macron’s way of “listening to people’s concerns, expectations and needs”. He told local young people that he wanted to get out on the ground “from the start”. One young woman replied: “Don’t just come here for the photos.” Another onlooker said: “It’s good that he’s getting out of the Élysée.”

Macron won a second term at the weekend, beating the far-right candidate Marine Le Pen by 58.5% to her 41.5%, but on the campaign trail he faced accusations of being haughty and aloof and of not understanding people’s concerns about the cost of living, housing, jobs and poverty. He had struggled to shake off the tag of “president of the rich”.

Macron said in Cergy: “I want to give a message of respect and consideration to these areas that are among the poorest in the country, right from the start of my mandate.”

He acknowledged that deprived, high-rise neighbourhoods surrounding Paris had some of the highest abstention rates in the presidential vote. Macron said “life was hard” there and some people felt angry or cut off from politics, and not enough progress had been made in recent years to improve their lives.

He said there were problems of discrimination, and a need for training schemes, more doctors and better health care in these areas, as well as job creation. “We’ve brought down unemployment here, but it’s still above the national average because of discrimination and not enough training,” he said after meeting young local entrepreneurs.

Macron, the first French leader to be re-elected for a second term in 20 years, is now focused on parliamentary elections in June. He will need a centrist majority in the 577-seat house in order to put in place his manifesto plans, including overhauling the benefits system and raising the pension age. Pollsters believe he has a good chance of winning a majority. 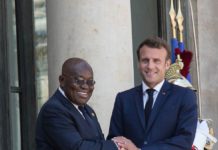 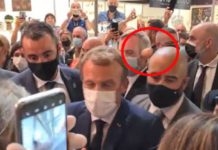 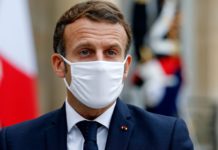 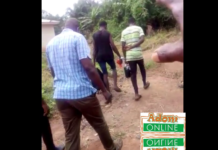