The taxi driver who stabbed a popular prophet to death in a road rage at Sekondi-Takoradi in the Western region has been arrested.

The driver stabbed Prophet Frank Agyekum popularly known as Odeefo Nkwantabisa, a popular radio preacher and also the pastor of the Charismatic Grace Chapel with a knife Monday at about 9:00 pm at the Race Course Junction at Apremdo.

The young man who drives a taxi cab with registration number GT 3781 T escaped from the scene after committing the heinous crime.

The prophet was then rushed to the Jemimah Hospital at Kwesimintsim but was pronounced dead on arrival.

The police then mounted a manhunt for him leading to his arrest.

ASP Adeku said the suspect is currently at the Kwesimintsim police station assisting in investigations. 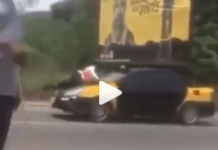