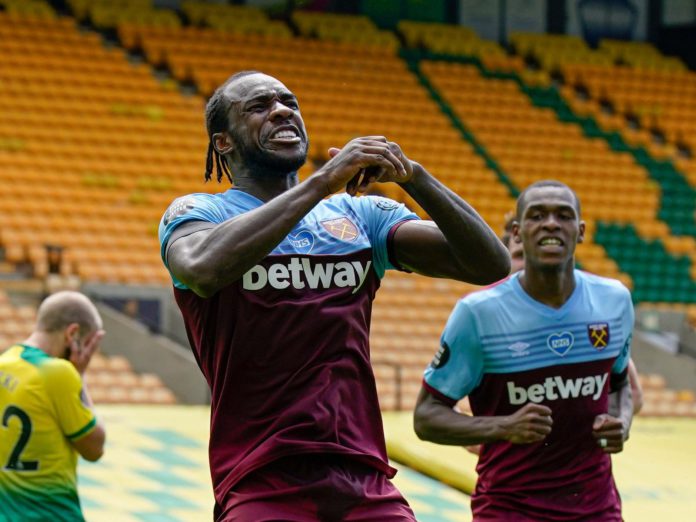 Michail Antonio scored an amazing four goals as West Ham moved closer to safety and relegated Norwich with a 4-0 victory at Carrow Road.

The Hammers started the game only three points above the drop zone, while basement side Norwich needed to avoid defeat to keep their faint hopes of survival alive.

The hosts found themselves down after just 11 minutes, however, as Antonio was left unmarked to finish at the far post following a Jarrod Bowen corner.

West Ham were dominant and doubled their lead from another set-piece in added-time at the end of the first-half, with Antonio’s glancing header from Mark Noble’s free-kick beating Tim Krul.

Antonio made it a treble after being slipped through by Noble nine minutes into the second half, heading into an empty net after Krul had saved his initial shot, as Norwich collapsed, and number four followed in the 74th-minute with a lovely flicked finish from Ryan Fredericks’ cross.

The victory means West Ham are now six points above the drop zone and with only three games remaining, their place in the top-flight looks secured.

Norwich, meanwhile, with just 21 points have officially been relegated to the Championship.