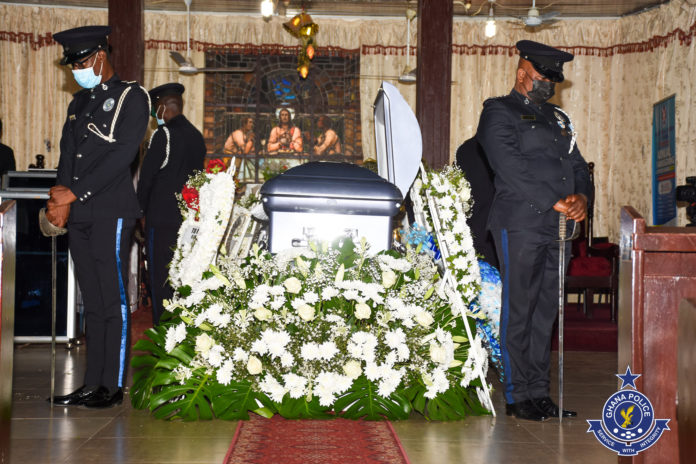 A former Inspector-General of Police (IGP), Ernest Ako (Rtd), has been laid to rest at Akropong in the Eastern Region.

The final funeral rites saw the current IGP, James Oppong Boanuh and personnel from other security agencies, in attendance.

The Ghana Police Band was also in attendance to treat mourners with good and soul-soothing music.

Mr Ako passed on on Saturday, January 16, 2021, after battling a short illness.

He was a brave Police Officer whose career started on 4th April 1941 and ended on 30th June 1978 with an unblemished record.

He is remembered as the IGP who started the Police Hospital in 1976 and the first to procure armoured vehicles for the Formed Police Unit (then Armoured Car Squadron).

He is also the first to celebrate Police Week in Ghana, giving the public the opportunity to visit Police Stations across the country, to learn at first hand the day-to-day operations and activities of the service.

It was the 1992 Constitution which reverted the Ghana Police Force to a Service again.