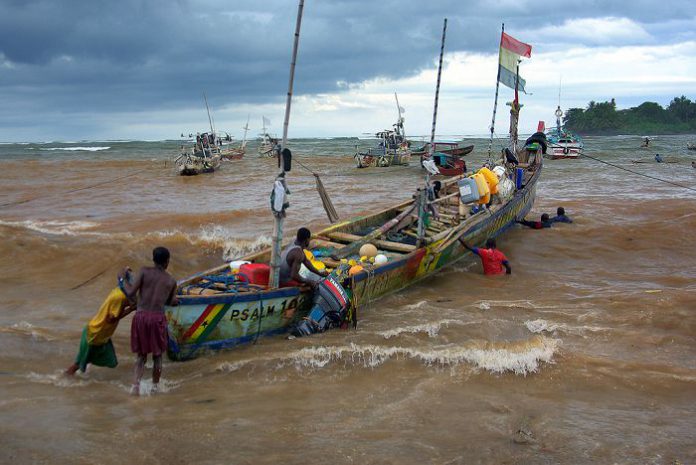 Fisherfolk in the Keta Municipality of the Volta Region are demanding livelihood support from the government during the closed season period.

According to them, the closure of the season would worsen their lives within the next one month, as they are yet to recover from the havoc that the coronavirus pandemic caused them.

They believe stipends from the government would cushion their lives within the period since fishing is the nerve of the local economy.

The closed season, which is one of the recommendations by the European Union to restore Ghana’s depleting fish stock, starts from today 1st July to 31st July for canoe and inshore fishers and from 1st July to 31st August for industrial trawlers.

Korsi Afetoku, who inherited the fishing profession from his father, fears the policy would bring hardship to their families within the period.

“We were not consulted before a decision was taken on the closed season. We are to stop fishing for about a month. What will we survive? We have school fees, medical bills among others to pay, ”he said.

It now behooves females to take care of their households, since their husbands would be idle at home within the period.

Mansah Axorlumega lamented that the period would be a difficult one for her five-member family.

“We the women take care of our husbands and children. We didn’t receive any support during the 2019 closed season which is why we are concerned about the plans of the government for us this year.

“We are in a period of hunger, we have endured enough hunger during the peak of the coronavirus pandemic. Secondly, we move to neighboring Togo to work in bad times, but we can’t do that now because the borders are closed. Badly for us, prices for food commodities are increasing. The government must provide us with some form of support within the closed season,” said another fisherman.

Speaking at the ceremony to officially declare the closed season, the Minister for Fisheries and Aquaculture Development, Mavis Hawa Koomson, addressed the concerns of the fisherfolk.

She said the government would provide some consumables to cushion the fisherfolk within the period to take care of their families.

She also announced that pumps will be stationed at the various landing beaches to dispense premix fuel to address the challenges of handing of the commodity among others.

Madam Koomson cautioned the fisherfolks to comply with the closed season directive since it would inure to their benefit.

The Volta Regional Chief Fisherman, Seth Kedey, advocated for the formation of monitoring units to ensure compliance within the period.

The Acting President of the Ghana Industrial Trawlers Association, Stephen Adjokatcher, pledged his association’s commitment to bring transshipment also know as ‘SEIKO’ to an end.

The Awomefia of the Anlo State, Torgbui Sri III, lauded the government’s efforts to restore the depleting fish stock and implored his subjects to abide by the directive.