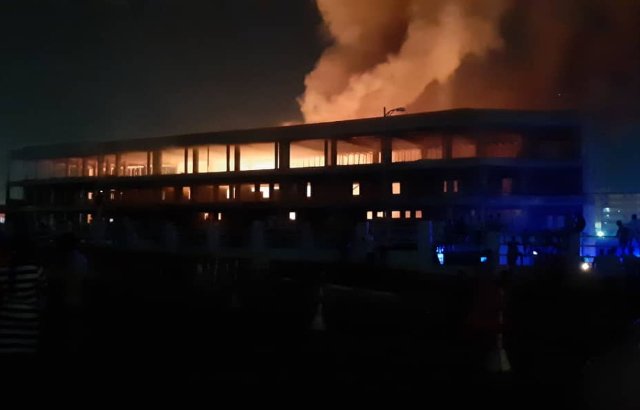 There were chaotic scenes in the Ashanti regional capital, Kumasi, as another outbreak of fire at the Asafo Market kept the city awake.

The fire was the second at the market in less than three days.

Luv FM’s Erastus Asare Donkor reported that about 30 market stores in the midsection of the Market had gone up in flames with the raging fire consuming wares with fury.

He said the efforts of firefighters were being greatly hampered because the area is largely inaccessible.

Firefighters had to use the upper terrace of a building under construction close to the fire scene to battle the inferno. Plumes of smoke billowing from the fire worsened the poor visibility at the scene.

A firefighter nearly fell
from the uncompleted building but he managed to cling on.

According to Erastus, scores of traders invaded the market carting their wares to safety, exacerbating the chaos on the humid Sunday night.

On Friday, a section of the Asafo Market caught fire destroying many market
stalls.

The clothes section of the
Kumasi Central Market also went up in flames – the fire consumed
entire shops – reducing them ashes.

The congested nature of the markets makes them prone to fires – the same
factor which accounts for the inability of the fire service to battle these
fires when they occur.