The Ghana National Fire Service (GNFS) has expressed sadness over a fatal accident that has left four of its officers in critical condition.

GNFS in a statement has assured it will give the victims the best medical attention.

The accident occurred after a motorcycle and the fire tender they were travelling on collided at a section of the Kwame Danso-Atebubu road in the Bono East Region on Tuesday.

The fire officers were responding to a distress fire call at Atebubu.

One person, the pillion rider, is reported to have died on the spot following the crash.

The fire tender lost its balance and summersaulted thrice on the highway, landing on its roof in a nearby bush.

Four of the victims have been referred to Techiman Holy Family Hospital for further treatment.

But the statement has indicated the Service Council and the Interior Minister have put in place plans to airlift the affected fire fighters to Accra for further medical attention.

“Management wishes once again to assure the entire personnel of the Service and the public that, the safety of firemen remains the ultimate priority and we will continue to ensure a safe and conducive working environment for all personnel,” the statement signed by the Head of Public Relations, Osafo-Affum, read. 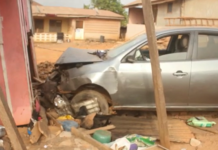