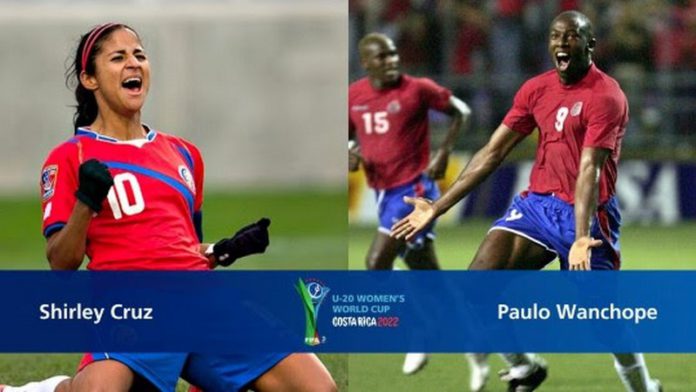 With just under one month to go until the Official Draw for the FIFA U-20 Women’s World Cup 2022™, Costa Rican legends Shirley Cruz and Paulo César Wanchope were announced today as the draw assistants for the star-studded event, which will take place on Thursday, 5 May.

With the FIFA Women’s World Cup 2023™ fast approaching, some of the world’s best young players and future superstars of the women’s game will showcase their skills in Costa Rica later this year at the FIFA U-20 Women’s World Cup, which will take place from 10 to 28 August 2022.

Taking place at the Teatro Nacional in San José, the star-studded Official Draw for the FIFA U-20 Women’s World Cup Costa Rica 2022™ will be hosted by athlete and TV host Johanna Solano, who will be joined by two icons of Costa Rican football, Shirley Cruz and Paulo César Wanchope, as well as Jaime Yarza, FIFA Director of Tournaments, who will conduct the draw.

The draw on 5 May will also coincide with celebrations in Costa Rica during the week around the “100 days to go” countdown until the opening match kicks off at the FIFA U-20 Women’s World Cup 2022.

“I am honoured to be part of the draw on 5 May and join some of the world’s best young players in the women’s game and future superstars of world football. The FIFA U-20 Women’s World Cup in Costa Rica will allow us to inspire all generations of footballers and create a lasting legacy. With the tournament just around the corner, we look forward to giving the warmest of welcomes to players, coaches and fans from around the world.”

“I am very honoured to be participating in the Official Draw for the FIFA U-20 Women’s World Cup Costa Rica 2022. Costa Rica is a country of great passion and enthusiasm for football, and the fact of hosting this World Cup in the country fills us with immense pride. It will be a great event, and we invite fans and players from around the world to join us for what will be an amazing tournament.”

A total of 32 matches involving 16 women’s national youth teams from around the world will be played in two Host Cities – San José (Estadio Nacional) and Alajuela (Morera Soto).

The match schedule for the FIFA U-20 Women’s World Cup Costa Rica 2022 is available HERE .

Of the 16 teams, 14 have so far been confirmed for the tournament, including Australia, Canada, France, Germany, Ghana, Japan, Korea Republic, Mexico, Netherlands, New Zealand, Nigeria, Spain, the USA and hosts Costa Rica. The two remaining teams from South America will be known on 24 April after the CONMEBOL Sub 20 Femenino 2022 in Chile.