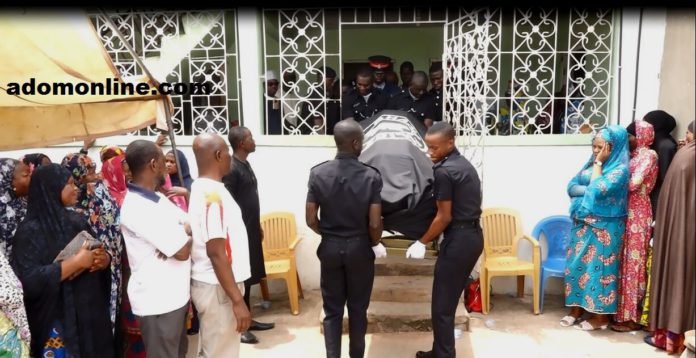 The family of a police officer, Lance Corporal Mohamed Awal, who was allegedly gunned down by a man in Gomoa Buduburam in the Central Region, have called for stiffer punishment for the killers.

A cousin to the deceased, Abdul Fataw who speaks for the family complained about the punishment slapped on persons who commit crimes like murder. He believes the current disciplinary system is too lenient.

“Sometimes we feel that the punishment meted to people committing such kind of crime is not proportionate to the cost of problems they are causing by that action; like the way they brought my brother down,” he said.

In his view, those who take the lives of others should be subjected to equal punishment to serve as a deterrent.

ALSO: Man gives kudos to himself for successfully raping a 14-yr-old girl

The late Mohammed Awal is known for his charitable works in the Abuakwa Zongo community in the Ashanti region, where he hails from.

He is said to have single-handedly contributed GH10,000 into education fund set up for needy but brilliant students in the community.

He is on record to have distributed education materials, including mathematical sets to BECE candidates and also paid school fees of some needy students himself.

”Sergeant Michael Dzamesie and L/CPL Awal Mohammed have been two hardworking officers who discharged their duties creditably in the interest of the nation and should therefore not suffer this unfortunate fate. These gallant men will forever be remembered for their acts of sacrifice for the nation,” Dr. Bawumia stated at the burial service.

Meanwhile, the Kaneshie District Court has remanded seven suspects arrested in connection with the killing of two police officers.

The seven, Eric Kojo Duah, Ibrahim Zakariah, Isaac Mensah, Obletey Commey Victor Yire and Fatawu Ahmed who appeared in court on Monday have been charged with conspiracy to commit murder, abetment of murder and murder.

The seven who had no legal representation are to reappear in court on September 26.