Majority Leader in Parliament, Osei Kyei-Mensah-Bonsu, has urged the government to extend benefits of the One District One Factory (ID1F) initiative to Dzata Cement, a wholly owned Ghanaian firm, to spur the growth of the company.

Firms under 1D1F enjoy a range of financial support, including equity investment, long and short-term trade, and asset financing, in addition to business support services, assistance with regulatory and legal compliance from the government.

Speaking to journalists after leading members of the joint committees of Trade and Industry and Works and Housing in Parliament, on a facility tour of the company in Tema on Thursday, Mr Kyei-Mensah-Bonsu said such offers would enable the company expand and employ more Ghanaians.

He also wants Dzata Cement to be exempted from levies and duties paid on import of equipment as part of the expansion drive, noting that though the company is at its infant stage, it currently employs 400 direct workers with over 3,000 agents and distributors across the country.

“So many people depend on this factory and certainly it is lifting them out of poverty. And this is what Ghana requires at this time, especially post-COVID and the Ukraine debacle,” he stated.

“It takes a lot of financial capital. If interest rates are high, it will not help him. It is for this reason we should all try to bring some stability in the financial setting. Again, production so much depends on power that is generated and sold to them,” he asserted.

For him, Dzata Cement ought to be assisted in order to overcome some of its teething problems, asserting, “because cement really is at the heart of the construction business. We all know the deficit of housing in the country is in excess of 1.5 million and we need cement to do the construction.

“What can be done by Parliament to assist the company to expand and employ Ghanaians as well as offer the system greater resilience for the economy so that we will be able to overcome the occasional sneezing from the West and China,” he pinned.

The Minority Leader, Haruna Iddrisu, who was part of the team, praised the company for exemplifying the Ghanaian entrepreneurship, while he also called for support for Dzata Cement.

Executive Director of Dzata Cement, Ibrahim Mahama, said he had plans to expand production, disclosing that the company intends to construct eight additional silos within phase two and three at estimated costs of $32 million and $48 million. 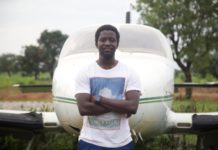