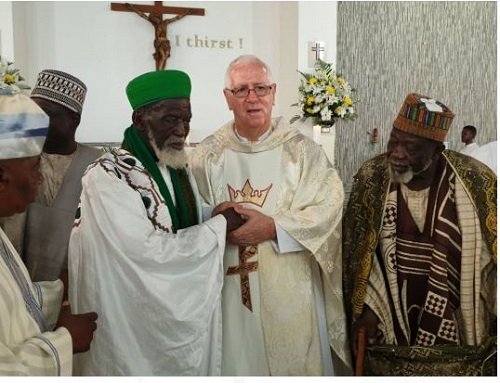 Feelings of excitement
and hope in one instance, and a feeling of sadness and hopelessness in the
other.

It is trite knowledge that Ghana is a secular State. This means the
State is or purports to be officially neutral in matters of religion,
supporting neither religion nor irreligion.

Religious pluralism, thus, thrives with thousands of sects that profess to believe in what they believe in without any hindrance.

Though Ghana has for many years enjoyed relative peace with the citizenry existing harmoniously irrespective of religious differences, the Sunday gesture by the Chief Imam was one in a million.

The National Chief Imam, Sheikh Osmanu Nuhu Sharubutu on Easter Sunday visited the Christ the King Catholic Church in Accra to worship with them.

No need to
be mistaken, he was not there to enjoy Easter as some initially thought. He was
there for a bigger assignment.

Spokesperson for the Chief Imam, Sheikh Aremeyaw Shuaib, is
best placed to explain the rationale: “As an icon of interfaith
dialogue, interfaith harmony, interfaith friendship, he decided to stretch a
hand of friendship to a church. That is a symbolic gesture to send a certain
strong message for the possibility of Muslims and Christians to live in peace
on the foundation of mutual respect, mutual cooperation and mutual solidarity.”

That was not only historic, but showed how deep the National Chief Imam is and his contribution to fostering peace and harmony in the country.

While we are basking in
the glory of entrenching our religious tolerance and living peacefully, others
are being slaughtered heartlessly elsewhere.

On Easter Sunday, over 200 people lost their lives in Sri Lanka leaving the citizens in a state of shock and confusion.

According to Sri
Lanka’s Minister of Defence, Ruwan Wijewardene, the Sunday bombings were in
response to a recent attack on mosques in New Zealand.

“The preliminary investigations have revealed that what happened in Sri Lanka (on Sunday) was in retaliation to the attack against Muslims in Christchurch,” he told Parliament.

This is indeed
sad. Our hearts and condolences to the bereaved families.

It is our hope that the world will one day learn from Ghana and stop the needless slaughtering of innocent souls in the name of religion.