Some artistes whose names appeared in a list purported to be people who were paid for Ebony’s tribute concert have spoken.

According to them, they were not paid for performing at the concert which preceded the funeral of the late dancehall artiste Ebony held on 24th March 2018.

Edem before responding to the allegation in a video has shared a screenshot of a chat he supposedly had with Bullet, on social media. 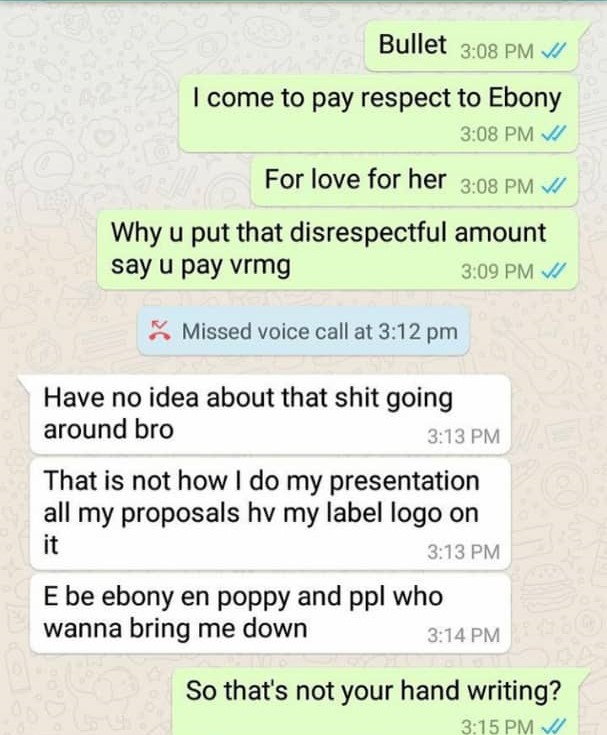 On the part of Keche, they replied a post made by broadcaster Nana Aba Anamoah on Instagram.

A document released by the father, Mr Opoku Kwarteng shows names of artistes written in ink and the amount they were allegedly paid for performing at Ebony’s tribute concert:

Information also has it that R2bees whose name was mentioned in the list were at the nominees’ jam of the Vodafone Ghana Music Awards in Cape Coast on the same day, around the same time.

Bullet is yet to make an official response to the list which has been attributed to him by Ebony’s father.

Mr Kwarteng and Bullet for the past few days have been locked in duel over proceeds from the tribute concert which was purposed for Ebony Foundation.

The release of the supposed list of artists who were paid at the concert was precipitated by Bullet’s response to a recent claim by Ebony’s father that he was given a paltry share of the profit made from the concert.

According to Bullet, there were reps of Ebony’s family at the gate and knew how much they made from the concert.

He also listed all the monies he has paid to Mr Kwarteng as proceeds from other engagements and revenue from Ebony’s works.