The Energy Minister says the challenges bedevilling the Electricity Company of Ghana (ECG) may lead to its collapse if they are not remedied urgently.

Mr. Boakye Agyarko revealed the country’s power distributor is currently operating with a capital deficit of GHS2 billion, a situation that threatens its survival.

Speaking on the last day of the National Policy Summit 2017 at the Accra International Conference Centre Tuesday, the Minister said any turnaround solution for ECG will require its balance sheet to be fixed.

Ghana’s energy supply has been erratic for the past four years, a development that is largely blamed on the inefficiency of ECG. Both local and foreign businesses were affected during the country’s three-year energy crisis known locally as dumsor.

The company and the Northern Electricity Distribution Company (NEDCO) are the two entities that sell electricity generated by the Volta River Authority (VRA) and Ghana Grid Company (GRIDco).

But faulty transmitters, mismanagement, and financial challenges have been identified as some of the major issues hampering the operations of ECG.

This compelled the past National Democratic Congress (NDC) government to give the company out to a concessionaire to improve on its efficiency but this has been dogged by controversy.

Negotiations for the concessionaire agreement of ECG have been acrimonious because workers of the company have resisted it. They claimed the agreement captured in the United States Millennium Challenge Corporation Compact II Agreement will lead to a worker lay-offs.

The President Nana Addo Dankwa Akufo-Addo government has assured there will not be any lay-offs since it has renegotiated some of the provisions in the agreement.

Related Article: No ECG worker will be laid off under MCC compact II – Akufo-Addo

The Energy Minister who will be supervising the concession process said the rate at which ECG loses power will come to an end if the agreement is completed.

“I sometimes say this to the chagrin of my friends at ECG but it must be said nonetheless [because] 21 percent of power is lost,” Mr Agyarko said. “Technical losses you can’t do anything about it but to lose 21 percent of what you are selling ipso facto makes you unprofitable.”

He explained every percentage of power lost by the company is equivalent to GHS60 million, which ends up weakening further the capacity of ECG.

The Minister said as part of plans to improve the reliability of power supply in the country, government will drive innovation at the ECG and the Public Utilities Regulatory Commission (PURC). 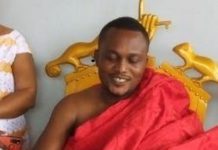