Mr Duncan, who is assistant to Head Coach Charles Akonnnor, has become one of the most experienced technical heads in the country and has handled most of the big clubs in Ghana including Accra Hearts of Oak, Asante Kotoko and Ashantigold.

With this expertise, Mr Duncan is deemed as an all-round tactician who can handle the national team.

“I am happy he has David Duncan with him. He is all rounded as he understands the technical aspect of the game and he has played too,” he told Nhyira FM.

“I even feel David Duncan should have been the head coach but it is fine he is assistant.”

Duncan in February 2020 assumed his new role as deputy to C.K. Akonnor in the new Black Stars technical team.

He has also coached Ghana U17 team, the Black Starlets in 2004-2005 and the Olympic team Black Meteors in 2011 where he lost to Sudan 2-1 on aggregate preventing qualification to the London 2012 Olympic games. 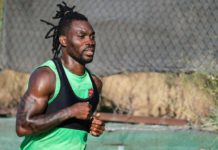