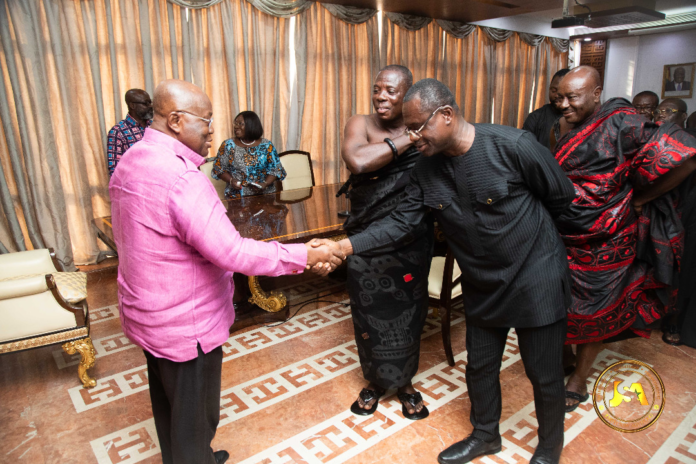 A delegation from the bereaved family of the Founder and Executive Chairman of the Jospong Group of Companies (JGC), Dr Joseph Siaw Agyepong, has paid a courtesy call on President Nana Addo Dankwa Akufo-Addo, and Vice President, Dr. Alhaji Mahamudu Bawumia.

The delegation, led by Abusuapanyin Barima Osei Berko, met both President Akufo-Addo and Vice President Dr. Mahmoud Bawumia on Wednesday, July 20, 2022, at the Jubilee House, the seat of government, and formally invited them to the funeral of the late father of Dr Siaw Agyepong—Opanyin Samuel Kwame Agyepong.

“After observing the one week observation, the extended family and the children of late Samuel Agyepong met to decide on the burial and funeral date. So we are here to officially inform you Mr. President and formally invite you to the funeral of late Samuel Agyepong which is slated for September 10, 2022, and would be held at the forecourt of the State House,” Abusuapanyin Osei Berko said.

However, he indicated that the family have agreed that the burial of their later father will take place in Obo Kwahu in the Eastern Region on the same day (September 10, 2022).

“And on Sunday, September 11, 2022, a service of thanksgiving will be held in honour of the late Samuel Kwame Agyepong at the Teshie Nungua Estate of the Church of Pentecost.”

“…From the church, the family will continue with the funeral of late Samuel Agyepong at his residence at Teshie Nungua Estate,” he further disclosed.

Abusuapanyin Osei Berko, therefore, used the opportunity to express his family’s appreciation to the President, especially for delegating his chief of staff and other ministers to participate in the one week observation of Dr. Agyepong’s late father.

As custom demands, Abusuapanyin Osei Berko presented a box of schnapps and some foreign drinks which were received by the President’s Secretary.

While commiserating with the family of Dr. Siaw Agyepong for their loss, President Akufo-Addo eulogised late Samuel Agyepong, stressing that he has given Ghana Dr. Siaw Agyepong, who continues to contribute his quota in various sectors, towards the development and growth of the country.

He minced no words in asserting that under his presidency, Dr Siaw Agyepong was one businessman who has contributed immensely towards the development of Ghana.

Though the President was not too sure whether he could travel to Obo for the burial, he gave the assurance that he will ensure that he participates in the funeral at the State House.

He thanked them for the courtesy call and the invitation extended to him to attend the funeral, assuring that the presidency will take active part in the burial and funeral.

For the part of Dr. Bawumia, he consoled the family of Dr Agyepong, saying that “God willing on September 10, we will come and support you to ensure that everything goes on smoothly.”

He thanked God for blessing the late father of Dr Agyepong with longevity, expressing that “we love him [late Samuel Agyepong] but God loves him more.”