Counsel for the petitioner in the ongoing election petition on Monday implored the Supreme Court Justices to be guided by their conscience and their sworn judicial oath.

The lead counsel, Tsatsu Tsikata, who appeared to have come to court with an overflow of Sunday’s anointing, in his argument for re-opening the case said the nine-member review panel should have these two principles as their guide.

“I would like to end my submission pointing to the fact that, my Lords, should decide with your conscience and the judicial oath you took.

“For they sow the wind, and they shall reap the whirlwind,” Mr Tsikata quoted a scripture from Prophet Hosea.

The message of Hosea 8:7, quoted by Mr Tsikata, has been noted in modern times for its use in many speeches.

The proverb depicts an illustration gleaned from the agricultural process of sowing and reaping.

Per the scripture, a farmer may sow a seed and the type of seed he planted may bear fruits, the principal of duplication and multiplication.

The petitioner’s legal team is, therefore, urging the justices to sow the right seed by allowing them reopen their case, failure to do that may create a harvest of wrongs.

Counsel for the first respondent (Electoral Commission), Justin Amenuvor, on the other hand said the matter before the court was not one that required quoting biblical jargons but rather legal jargons.

Mr Amenuvor said indeed God is the God of conscience but should not be called under these circumstances.

“God is a God of conscience, you do not bring God into the court and say because of God the application should be granted,” EC Counsel said in response to Mr Tsikata.

Among other things, Mr Tsikata said the seven-member panel, who dismissed their re-opening application, erred fundamentally and committed a great miscarriage of justice.

It was the case of Mr Tsikata that the earlier panel in their ruling failed to make reference to the statues of the 1992 constitution of Ghana.

He said the panel rather resorted to foreign laws, including that of Netherlands and Blackslaw dictionary.

Monday’s hearing comes after the Supreme Court in a unanimous decision dismissed an application for reopening brought by the petitioner.

The apex court is yet to make a determination of the matter. 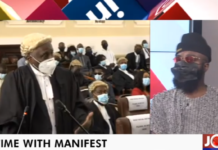 M.anifest describes how he felt when he watched his dad in court [Video] 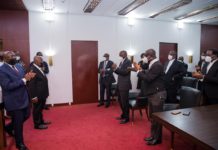 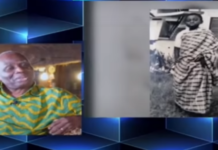