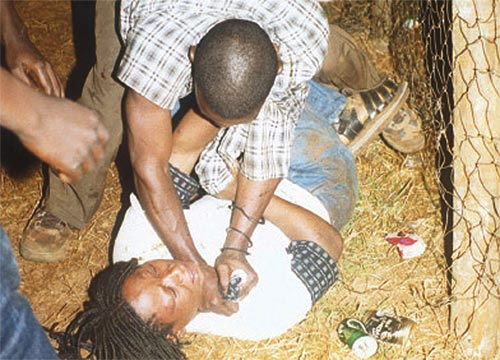 The Central Region has over the past two years recorded an increase in domestic violence.

She said statistics showed that women constituted more than 80 per cent of the victims of reported cases of domestic violence in the Region.

Domestic violence (domestic abuse or family violence) is violence or other abuse by one person against another in a domestic setting, such as in marriage or cohabitation.

She said the Domestic Violence and Victims Support Unit (DOVSU), was established in the Region in 2002 and in that very year 810 cases were recorded.

Mrs Kpe said this in an interview with the Ghana News Agency in Cape Coast, on the sideline of the UNFPA-UNICEF Joint Programme Steering Committee (JPSC) three-day field visit to project districts within the Central Region.

“And that could be positive, because we understand that people now know their rights and they are reporting cases. However, the level at which we are recording domestic violence is not acceptable. Violence against anybody should be of concern to all of us,” she stated.

“And so the high rate is not something we need to be comfortable about, and therefore, we need to work further to ensure that although people are aware and may be reporting cases to the police, we will still need to work on the minds of people for behaviour change, so that people don’t commit the crime in the first place.”

She said although it was positive that people were reporting cases of domestic violence, their aim was getting people to understand the need to prevent it from occurring.

She said non-maintenance was the basis of all the challenges; declaring that “once the children are not being maintained people will deceive them into sex and then the pregnancy occurs.”

“And one key issue that is of challenge here is non-maintenance, and it has been cited over and over, as one of the causes of the challenges confronting adolescent girls.”

Superintendent George Appiah-Sakyi, the Central Regional Coordinator of DOVVSU, said the functional Data Management System on issues of sexual and gender based violence installed by the UNFPA in all the DOVSU offices in the Region was helping in the more effective data capture.

The system links up all DOVVSU offices to the Headquaters for easy accessibility of data for informed decision making.

The UNFPA-UNICEF Joint Programme, dubbed “Empowering Adolescent Girls through Improved Access to Comprehensive Sexuality Education (CSE) and Rights-Based Quality Sexual and Reproductive Health Services in Ghana”, is being funded by the Canada Global Affairs in 36 districts in eight regions.

It is designed to support Government to implement its adolescent girls’ vision and deliver more integrated and multi-sectoral responses to address the interrelated needs of adolescent girls in Ghana.

The visit took the team to the Ekumfi District, the KEEA and Cape Coast.