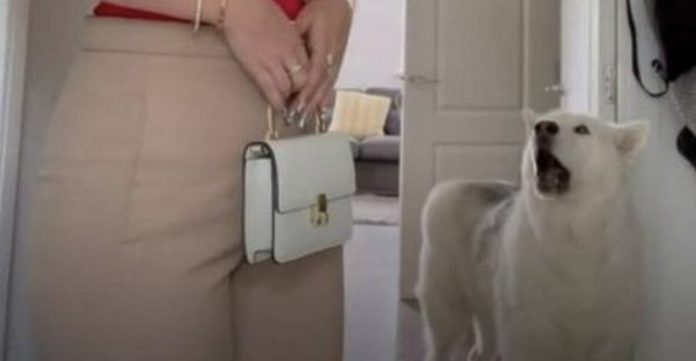 As pet owners, many of us know the struggle of trying to leave the house without your furry friend in tow – but one woman has discovered just how disappointed her dog gets when she leaves him at home.

A TikTok user shared a video – which has racked up more than 10 million views – that showed her using her phone screen to check out her outfit, before being hilariously interrupted by her dog.

The white Malamute named Hugo trots into the room and looks up at his owner before growling at her – and the noise he made shocked viewers.

Amazingly, the pooch’s whine sounded exactly as though he had asked his mum: “Where are you going?”

One person pointed out: “That dog asks, ‘Where you going?’”

While another agreed, adding: “He said … where are you going?”

And someone else had the same idea, as they said: “I swear the dog said ‘Where you going?’”

But other people heard slightly different words in the dog’s noise, and took to the comments to share what they thought the Malamute had said.

One wrote: “He sounds like he’s saying very nice.”

And another insisted: “I heard, ‘What are you wearing?’”

While a third posted: “He sounded like he said, ‘well hello’. I don’t know if someone else said that in the comments, but I just had to.”

And some people in the video’s 10,000 comments just wanted to share alternative funny sentiments about what the dog might’ve been thinking at the time.

Someone said: “He really said, ‘so are you gonna feed me or what?’”

Before another wrote: “That dog was way too political!”

And a third commented: “All I heard was, ‘You’re not going out of the house dressed like that’.”