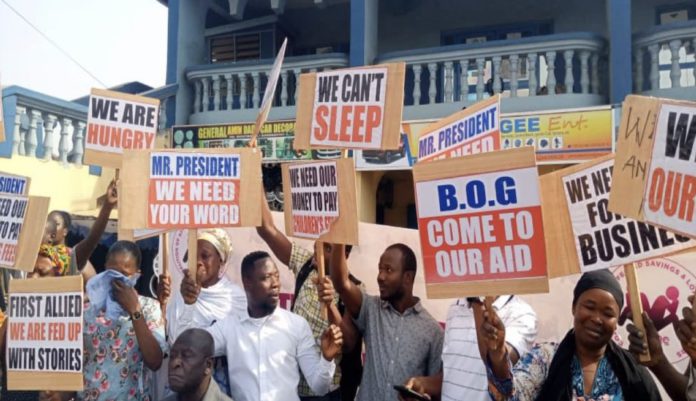 Customers of defunct savings and loans and finance house companies have called on government to set up a Consolidated Savings and Loans Company or a Consolidated Microfinance Company, through which their locked-up funds should be paid.

The group, known as the Coalition of Affected Savings and Loans Customers (CASLOC), said all their accounts should be “migrated and credited fully there if only the current Banking and Specialized Depositors Act will permit it.”

At a press conference in Kumasi, CASLOC said even if their request is not permissible, their accounts should be migrated to an existing universal bank or banks, “possibly the Consolidated Bank Ghana (CBG).”

According to CASLOC, this is because that is where currently all payments to affected customers are being made.

Against the backdrop that the bailout funds have been capped at GH₵20,000, CASLOC in its appeal for the government to also consider migrating them to CBG added that “maybe some restrictions about withdrawals” could be attached to the account for some time, until all the required bailout funds are secured.

CASLOC, which is made up of the customers of the 23 savings and loans and finance house companies whose licenses were revoked by the Bank of Ghana (BoG), said if the current trend of payments should continue no customer can tell when he or she will have access to his or her locked-up funds.

Additionally, they noted that it will take the Receiver and his staff about 132 years to finish paying all the locked-up funds of the over 3.3 million customers if it has taken over 3 years to pay just about 80 percent of the 100,000 customers of the defunct DKM Microfinance company.

The Chairman and Secretary of the group, Mr. Kofi Sarpong and Mr. Ezekiel Annor Akagbo, also called on the Council of State, Parliament, the Former Presidents, the National House of Chiefs, among others to help them to retrieve their funds.