Defence Minister, Dominic Nitiwul, has challenged former President John Mahama to provide evidence of his claims that the military is being used to intimidate prospective registrants in his party’s strongholds.

Addressing a media briefing at Parliament House on Monday, the minister insisted that the figures on registrations so far do not support the claims made by Mr Mahama.

“We have over 30,000 polling stations how many of them have we seen soldiers visiting for anybody to conclude that there is voters’ suppression. Of course, the military has visited places where there is trouble and that is their job.

“For anybody, especially a former President and Commander-in-Chief of the Ghana Armed Forces to conclude that there is voters’ suppression, I think he is misleading the people.”

Mr Nitiwul, however, insists that the military has a responsibility to stop foreigners from entering the country, adding that they will do that vigorously.

He said his outfit will take action if the NDC flagbearer was able to prove with evidence that people are being suppressed at registration centres.

He described Mr Mahama’s position as unfortunately, saying it undermines the security agency that has sworn to protect the country and its citizen.

“Let him and the NDC know that the military of Ghana is a professional institution. They will not and cannot be used by anyone to do their dirty work; the days when the military could be used to do that are over”

Addressing the brouhaha going on in the Banda area, Mr Nitiwul said there was a Regional Security Council directive, prohibiting political parties from busing people to registration centres which the military is enforcing.

He urged all political parties to desist from busing people to registration centresm adding that “if you attempt to bus people we will stop you.”

“It is not allowed and the military will continue to stop people who are busing people. Allow the people to go and register themselves, it is not your duty to bus them, and everybody will be allowed to register.”

Listen to the Defence Minister in the audio below: 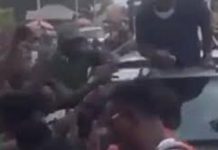