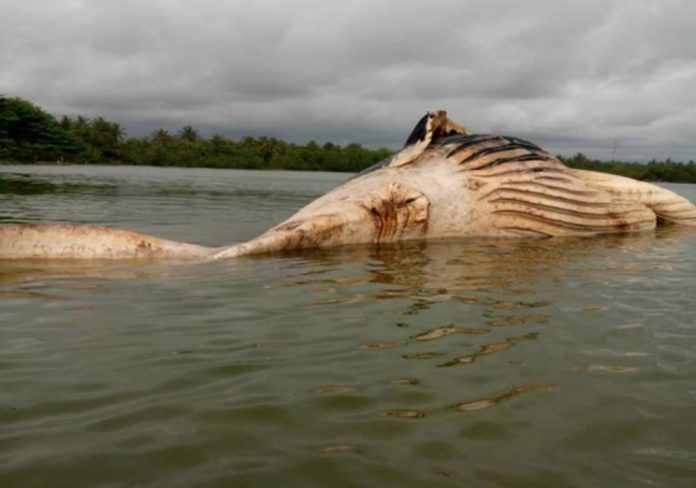 A sea mammal suspected to be a whale has been washed ashore dead at Princess Town in the Ahanta West Municipality of the Western Region.

Measuring about 10 metres, the sea mammal was found where River Nyane enters the sea at Princess Town.

A youth activist and a resident of Princess Town, Lord Owusu Mensah, who confirmed the story, indicated that the sea mammal was first seen at the area on October 26, this year.

He could not therefore fathom why the mammal was still lying at the place and decomposing.

“In fact, I went to the scene and saw the mammal but I cannot confirm whether or not it is a whale,” he pointed out.

He noted that even though the case was reported to the area’s assembly member, nothing was done about the situation as at Monday.

He indicated that the mammal has started to decompose.

He asserted that parts of the sea mammal appeared to have been damaged, which suggested that it might have had an impact with a heavy object that was huge enough to kill it.

He suggested that a team from the Environmental Protection Agency (EPA) should move to the area and initiate investigations to find out the cause of death of the whale.

An eyewitness was worried about what was gradually becoming a periodic feature in some coastal areas of the Western Region and called for an urgent investigation into the recurrent death of whales there.

He asserted that there had been over 21 reported cases of dead whales being washed ashore in the region since the drilling for crude oil started in 2010.

When DAILY GUIDE contacted the EPA officer in the Ahanta West Municipality, Ted Tettey, he noted that he was informed about the presence of the mammal in the area only yesterday.

“I am very surprised that my attention was drawn to the issue only yesterday even though the people claimed the mammal had been there since October 26 this year”.

“I am moving to the location with some officers to inspect the particular sea mammal and take the necessary action,” he pointed out.