After series of back and forth and having to stress his pocket, Nigerian superstar Davido has finally taken delivery of his Lamborghini Aventador.

The car, which he ordered last Christmas, has finally arrived in Nigeria after three months.

The music star took to his Instagram stories where he shared the first glimpse of his new ‘baby’.

The video captured the exact moment his expensive car was delivered to his residence at Banana Island, Lagos.

The black Lamborghini estimated to be about $400k is a reward to himself after a sold-out 02 Area concert in London.

Davido has ranted on social media over the exorbitant clearing fee he had to pay before taking delivery of his car.

According to him, the fee could have afforded a car of lesser brand. He blamed the Nigerian government for the poor state of the economy.

The son of a billionaire joins the small list of Africans to own a Lamborghini. 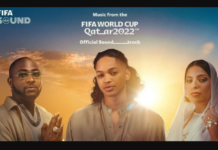