The long-standing feud between two comedians, David Oscar and DKB could be rekindled as the former has ridiculed the latter following a recent abysmal performance, abrantepa.com can state.

DKB is reported to have rendered an apology to patrons after he failed to shine at the second edition of Glo’s Laffta Fest, which took place at the Fantasy Dome, Trade Fair in Accra.

According to a publication by Showbiz, the ‘King of GH comedy’ could not crack the ribs of the audience for the over 20 minutes he was on stage.

DKB spoke about the President of Nigeria, Muhammadu Buhari answering questions with questions and the fact that Africa is poor and would like to be born in America in his next life. But all the jokes he shared did not impress the audience and some of the patrons started booing him.

The comedian then asked what he had done and then apologised for not lifting up his game on the night.

“It is not every day that your jokes land well and I accept the fact that I didn’t do well, better luck for me next time,” he stated.

In a post to promote an upcoming event by Augustin Dennis, a comedian said to have been banned by DKB for insubordination, David Oscar threw shades.
“I hear your king flopped on stage last night and is now apologizing? … Oh tell him we accepted the apology way before he offered it, but also tell him to come to the silverbird cinemas on Saturday night (15th Sept.) to watch Ghana’s best stand up comedian Augustin Dennis , so he can improve his shit !! HahHahahahahaha !!,” his post read. 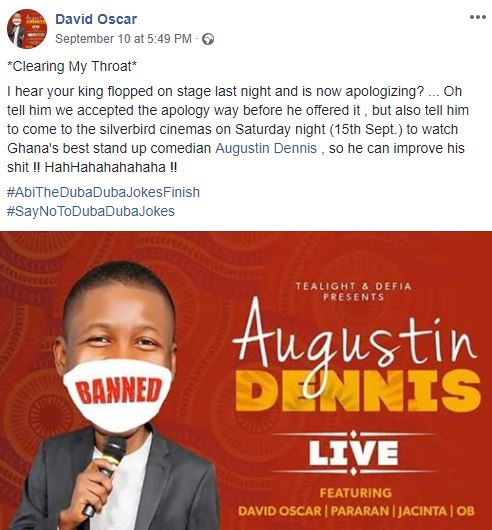 In February, this year, both comedians engaged in an altercation after David Oscar who claimed to be “the best thing that happened to Ghanaian Stand-up Comedy” said on Okay FM that DKB called him to attack event company Charter House in a documentary he was putting together.

David Oscar who claimed declined to DKB’s request also recounted that the two of them created fake accounts on social media to attack event company Charter House in the past but the latter has a good relationship with the event firm and does not understand why he’d want him [David] to sully his image by doing a dirty job for DKB in his documentary.

In response to the allegation, DKB said if he truly needed someone to bash Charterhouse in his documentary, he wouldn’t use David Oscar who quit comedy few years ago.

“If I want to attack Charter House, I wouldn’t need irrelevant David Oscar to help me. He said he has retired from comedy to do music, so why would I need a musician to help fight for comedians? Truth is, I never wanted to attack Charter House, and rather I wanted to do a GH comedy episode of upcoming TV show, so that we celebrate comedy from the beginning,” DKB said.