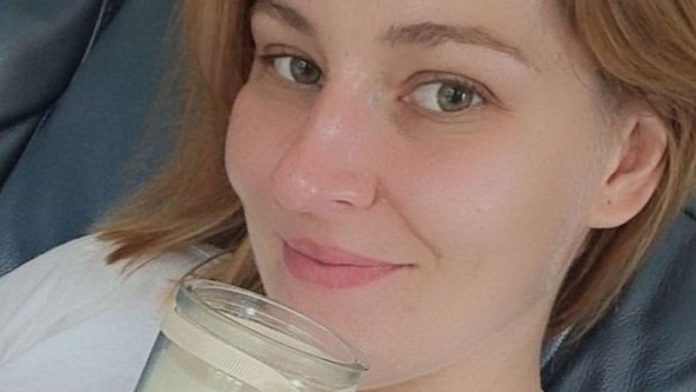 On Tuesday, September 14, Hayleigh Austin was opening carefully-wrapped birthday presents from her children, when she got a bit of a shock.

The 33-year-old had already been gifted an ornamental elephant and a bottle of gin from two of her daughters, Sophea and Kaytlyn.

When she got to the third, from her 10-year-old daughter Jesyka, she tore off the paper to find a candle in her favourite scent, vanilla.

It smelled “amazing” and seemed like the perfect present – until Hayleigh caught sight of what was written on the glass jar.

Her daughter sheepishly apologised that the candle didn’t say ‘mum’ on it, which is when the PA support worker took a closer look at the text.

She read a heartfelt message designed for remembering ‘a life so beautifully lived, a heart so deeply loved’ and realised the candle was intended as a memorial ornament, to mark a death – despite her being very much alive.

Stunned Hayleigh burst out laughing at the birthday blunder and joked she’d be sleeping ‘with one eye open’ in future.

Despite the candle being for someone who’s dearly departed, Hayleigh said she’s not ‘too superstitious’ to light it at some point – providing the words are facing away from her.

The parent, from Great Bardfield, Essex, said: “I guess I’ll be sleeping with one eye open [from now on].

“I think there was an ulterior motive – they were going to get me drunk, hit me over the head with the elephant, bury me and light the candle in memory.

“The candle is currently sitting on my bedroom side with the words facing the wall. Jesyka did say I could turn the bow round and not look at the words.

“I feel safe enough lighting it at some point, I’m not too superstitious.”

The mum shared the hilarious mishap on social media where it quickly went viral, racking up more than 4,000 likes, shares and comments.

Her post reads: “Today is my birthday and my wonderful husband took our kids out to let them choose their own present which was super sweet.

“Three-year-old chose an elephant ornament as she said it matched my bedroom.

“And 10-year-old bought me my favourite scent of candle which I thought smelt amazing until I read the words on the front.

“Guess I’ll be sleeping with one eye open tonight and the husband learnt the valuable lesson of always checking the kids’ choice of presents.

“What funny gifts have you randomly received?”

Hayleigh continued to say that her 34-year-old electrical engineer hubby Ricky Austin, took the girls shopping for the gifts

“Ricky’s in charge of taking them out every year for my birthday presents and they each get to pick a present.

“They’re normally quite good, he does have a little bit of influence sometimes for the younger ones because otherwise, I would end up with a Peppa Pig toy.

“Ricky had no idea until it came to wrapping it up the night before my birthday. He’s last-minute so by the time he did notice it, it was too late then.

“Jesyka was so determined to give me the candle because she knows that I love vanilla, so he wrapped it up.

“We’re quite a jokey, light-hearted family so he knew I’d see the funny side of it.

“I could smell it from the bag and I said ‘ah it smells amazing’ and she looked at me and said ‘I’m really sorry about the candle’.

“I asked why she was sorry and she said ‘because it doesn’t say mum on it’.

“When I read it and saw it was an ‘in loving memory candle’ I was in hysterics. My husband was laughing, Jesyka was laughing, it was very funny.”

After the present blunder, Hayleigh said Ricky had learned a valuable lesson and will check future purchases more closely.

The mum added: “The candle is currently sitting on my bedroom side with the words facing the wall.

“We had a good laugh about it. Ricky said in future he will check all presents properly.”