Rapper, Criss Waddle, has allegedly won a fraud case brought against him by the State.

He was ordered to appear before the court on Thursday, September 3, 2020, over an alleged fraud case.

This was after it was rumoured that one of his fake social media accounts operated by possible scammers was used to dupe somebody of his hard-earned money.

The rapper confirmed this on his Twitter handle when he wrote:

But after appearing before the court, he was allegedly cleared off the charges and recorded a video of himself at the court premises.

“When you are innocent, Court won’t waste their time, ” Criss Waddle said as he wins his ‘fraudulent charge’ case in court. 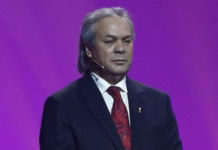