Ghanaian parents who refuse to allow their kids pursue careers and programmes in creative arts should not be blamed according to the Director of Creative Arts, Programmes and Projects at the National Commission on Culture, Socrate Safo.

Speaking to Adom TV’s Sandra Akakpo in an exclusive interview, Mr Safo said the Creative Arts industry is not attractive because players don’t serve as good remodels for children.

He cited how parents prefer their children to be doctors and bankers instead of actors or actresses to buttress his point.

“I don’t blame parents who don’t want their kids to be in the arts industry. I will blame those in the arts sector with regards to their lifestyle that these parents pay attention to. For instance, look at bankers and doctors with the way they carry themselves it appeals parents…” he explained.

According to Mr Safo, if a parent disallow their kids to be involved in the arts sector it’s understandable because “Some artistes gain money and don’t save a penny. They blow everything forgetting their time will pass. Later, they tend to beg and expect the society to take care of them…” he said.

On the way forward, the Director of Creative Arts urged artistes in the entertainment industry to adapt positive lifestyle that would make the industry attractive.

“I believe we should focus on how we manage ourselves. Creative artistes should manage how they carry themselves. They should work on their approach and dressing. Let’s chastise our creative artists for not managing themselves well…” he urged.

“There are people who are paid and when they get broke, it’s very difficult to understand. Some cannot be able to cater for their kids. That is where the problem is and not the society. That is what I stand for now. I am for the truth and that is where I will always come from…” he added. 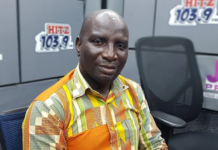