President Nana Akufo-Addo has declared the government’s stance on the issue of a partial or total lock-down of the nation.

The president, speaking to a delegation from the Ghana Trades Union Congress (TUC), said a lock-down, if not properly done, will have many implications on Ghanaians and as such the government is still monitoring the situation to take decisions that would be helpful to all.

He said many proposals for a lock-down have come in and all the issues would be considered and if the need be a decision would be made.

In a separate media interview, Information Minister, Kojo Oppong Nkrumah said the President had directed the Finance Minister, Ken Ofori-Atta to put together the economic implication of a lock-down before any decision could be made. 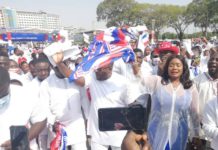