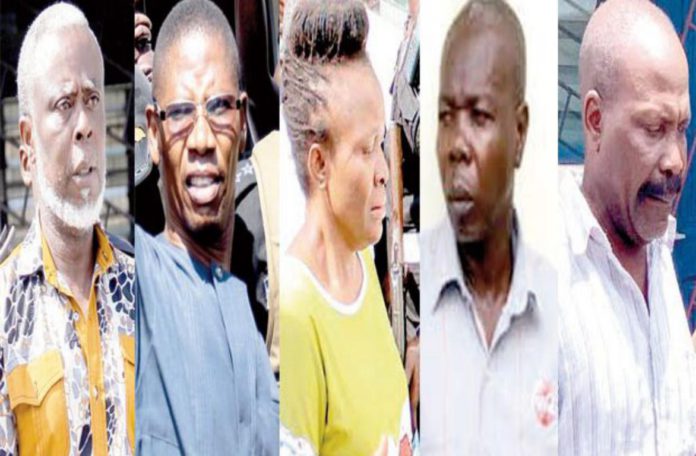 An Accra High Court refused to stay proceedings in the trial of 10 persons arraigned before it for attempting to violently overthrow the Nana Akufo-Addo-led New Patriotic Party (NPP), by dismissing two applications for stay.

On Monday, January 16, 2023, the court, in its ruling on the two applications, said it will be unfair on the other eight accused persons if it should grant the request for stay of proceedings pending the determination of a matter at the Supreme Court.

Counsel for ACP Dr. Benjamin Agordzo had gone to the Supreme Court to challenge an order by the court on him to open his defence after the court found that the prosecution had made a prima facie case against him.

He and another accused person subsequently filed an application for stay of proceedings pending the determination of the case by the Supreme Court.

A three-member panel of the court, presided over Justice Afia Serwah Asare-Botwe and assisted by Justices Stephen Oppong and Hafisata Amaleboba, all Court of Appeal judges sitting as additional High Court judges, in their ruling held that the applications did not demonstrate any exceptional circumstances for which the trial must be stayed.

The court added that, it would be unfair to grant the applications to the detriment of eight other accused persons, who were ready to proceed with the trial.

Meanwhile, the court has once again ordered the accused persons to file their disclosures by January 27, 2023.

The court, in July 2022, had ordered all 10 accused persons to file their disclosures after it ordered them to open their defence in a ruling on submission of no case filed by the defence lawyers.

But the accused persons failed to comply with the order, a situation which did not do down well with the court, which cautioned the defence team that it will not entertain any delays.

Some of the defence lawyers attempted to explain their inability to comply with the court’s order, but the three-member panel said there was no excuse or whatsoever for the parties to have failed in complying with its orders.

The court adjourned the trial to February 1, 2023 and ordered the accused persons to file their disclosures before January 27.

ACP Dr. Benjamin Agordzo and Col. Samuel Kojo Gameli on the other hand have been charged with two counts of abetment of high treason each.

The accused persons including three civilians and six military officers are being accused of planning to usurp the executive powers of the state.

Subsequent to their plans, they are alleged to have hired the services of a local gun manufacturer to produce improvised explosive devises (IEDs), guns and ammunitions with which they intended to carry out their plans.

They are alleged to be members of a non-governmental organisation, Take Action Ghana (TAG), formed by Dr. Mac-Palm.

A civilian employee of the Ghana Armed Forces, Gershon Akpa, who is a weapons mechanic, is alleged to have agreed to sell two guns to the ‘coup doctor’ at a cost of GH¢7,000. He took GH¢2,000 part-payment but returned the money later because he could not supply the guns.