A Kumasi High Court has convicted four Chinese nationals for their involvement in illegal mining activities on a 40-acre land of Obuasi-based Seidu Fanzia School.

The plaintiffs sought compensation and other reliefs from court.

However, Shi Li Wen, Huang Shen Jun, Li DeHao and Lan Hai Song are to be deported for illegal stay and using fraudulent means to validate their stay and working without the required permits.

“The four Chinese citizens, who have all violated sections 23(1) and 35(1, d) of the Immigration Act 2000 (Act 573) of Ghana, when found working by prospecting for gold on the disputed site at Obuasi are to be deported to their country of origin by this court and are hereby deported,” said the Presiding judge.

Asamoah Kati, the Chinese and their Ghanaian collaborator, were arrested after a Kumasi High Court, presided by Justice Emmanuel Senyo Amedahe, granted an absconding warrant.

They were arrested whilst mining gold under the protection of armed guards on land earmarked for a school.

The convicts, who could not meet the bail condition of ¢200,000 each with two sureties, were ordered by the court to deposit their passports and work permits for fear of absconding before the final determination of the case.

They have remained in prison custody since April 19, 2021, until Thursday, when the court ordered their deportation.

“The retention slip numbers and dates on which the passports were retained creates much suspicion as to when they applied for renewals of their resident and work permits and when they were arrested at their site on April 19, 2021.

The court also heard three of the convicts applied for renewal of permits on May 4, 2021. But the court held that was impossible since they were in prison custody.

Presiding Judge, His Lordship Justice Amedahe, faulted officials at the Kumasi office of the Ghana Immigration Service for deliberately accepting applications of the convicts against their mandates. Such applications are only done at the National Headquarters.

“In this case, after the arrest of the applicants, some officers of the Ghana Immigration Service’s office in Kumasi played various roles in assisting the four applicants living illegally to circumvent the Immigration Act to legalise their stay so they could continue with destruction of our environment.”

“The fight against the galamsey maniac must be extended to the Ghana Immigration Service where the residential status of foreigners who come into this country with 60 days visitor’s visas (B1) issued by our Embassies outside are quick upgraded them into Resident Permits by these officers.

“Some of these visitors engage in illegal mining destroying our lands and water bodies. Some Immigration officers are also quick in doing anything to make things which are illegal to look legal”.

He appealed to the Interior Minister to reconsider the use of discretion by Immigration officers to issue Resident Permits to foreigners who arrive in the country on 60–day visas.

“The court will take this opportunity to appeal to the Minister of Interior to reconsider the use of the discretion of our Immigration Officers in granting of Resident Permits to a foreigner who arrives in this country on 60 days, B1 visas. It has become the order of the day to grant one-year resident permits to foreign visitors when they are not even qualified under the Immigration Act of Ghana to be granted.”

Among reliefs sought by the plaintiffs were declaration that the defendants mining activities were illegal, damages for trespassing and loss of use of the land.

They also sought special damages for the destruction of foundation structures of development projects at the cost of ¢500,000.

“Lands belonging to my clients at Airport Residential Area and those lands were earmarked for industrial and commercial developments.

“All these pieces of land have been destroyed, so we were asking the court to give us some amount of money representing the land that they have destroyed and also asking for compensation.

“But as the court indicated, the state’s interest is paramount, and it’s superior to that of an individual; therefore, once they were not legally in our country, our interest against them would not be considered above that of the country.

“So virtually, we are getting nothing, but if it is in the country’s interest, then once they are deported, everything comes to a halt. We’ve got nothing out of it. It’s a disappointment, though, but they say it’s in the interest of the state.”

Counsel for the Chinese nationals, Benjamin Andoh, is also not dissatisfied with the ruling. He will confer with his clients for the next line of action.

“The court has made a ruling today. We are not happy with the ruling. We are so dissatisfied with the ruling, but that’s the court’s ruling, but we are bound by it. For now, I have to talk to my clients, take further instructions from them so that we know the next step to take.” 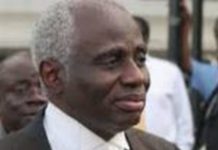 Judiciary is concerned about impact of illegal mining – Chief Justice